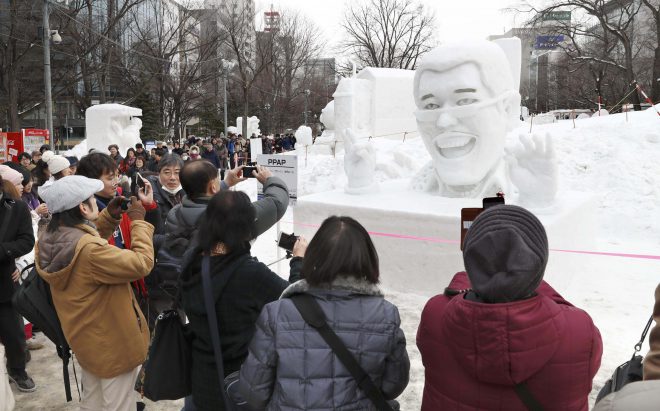 Sapporo- The 68th annual Sapporo Snow Festival opened on Monday, putting on display a total of 200 snow and ice sculptures at three sites, including Odori Park at the heart of Sapporo, capital of Hokkaido, northernmost Japan.  Exhibits at the main Odori Park site include five large snow sculptures, including one featuring characters from popular game "Final Fantasy VII." Sculptures of the Arc de Triomphe in Paris and robot characters from the "Star Wars" movie series, the first of which came out in 1977, are also on display. In addition, visitor attention is being focused on 80 smaller snow sculptures made by local residents. They include sculptures of Pokemon Go smartphone game characters and Japanese musician Pikotaro, known for his nonsense tune "Pen-Pineapple-Apple-Pen." "I was impressed by the intricacy of the snow sculptures although they are large," a 56-year-old housewife from Sao Paulo who visited the festival said. "I'm looking forward to illumination at night." The festival attracts more than two million visitors, including from overseas, every year. This year's event will be held through Sunday. (Jiji Press)