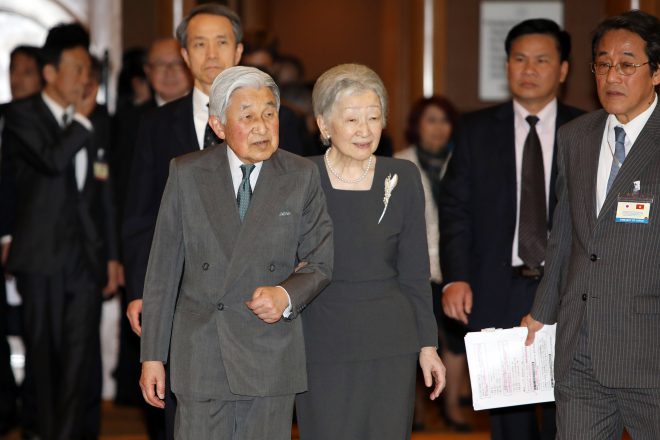 Tokyo- A special Imperial abdication bill planned by the Japanese government will mention Emperor Akihito's "thoughts" on stepping down from the throne, as a product of compromise with opposition parties, a draft outline of the bill showed on Tuesday.
The draft pointed out that the 83-year-old Emperor is deeply concerned that it will become difficult for him to continue to work as before and that the people understand and have sympathy with the Emperor's thoughts.
Emperor Akihito's abdication and the Imperial heir's accession to the throne will be realized as an exception to Article 4 of the Imperial House Law, it said. The article stipulates, "Upon the demise of the Emperor, the Imperial Heir shall immediately accede to the Throne."
In a video message in August last year, Emperor Akihito expressed his strong wish to step down due to his advancing age.
The government initially planned to avoid referring to the Emperor's message in the special abdication bill to prevent it from breaching Article 4 of the Constitution, which bans political activities by the Emperor.
But as the main opposition Democratic Party and other opposition parties called for such reference following recommendations made in March by the Diet, Japan's parliament, on the issue of Imperial abdication, the government appears to have compromised on the inclusion of the Emperor's "thoughts" in the abdication bill.
The government plans to shortly present the draft outline to both the ruling and opposition camps. It aims to adopt the abdication bill at a cabinet meeting on May 19 and get it through the Diet during the ongoing regular session.
According to the draft, a planned additional clause of the Imperial House Law will clarify a link between the Imperial code and the one-off abdication bill. (Jiji Press)