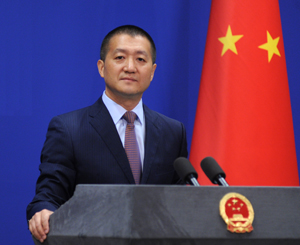 BEIJING- The South China Sea issue is the business of China and other directly concerned countries, which have agreed to focus on joint development and regional peace and stability, said a Chinese Foreign Ministry spokesman on Tuesday in response to the new U.S. administration's intended interference.
Lu Kang clarified China's stance in an interview in Beijing with NBC News. The interview came after Whited House press secretary Sean Spicer said the United States would stand up to China on the South China Sea issue, vowing "that we defend international territories from being taken over by one country."
"That's not international territories, that's Chinese territories," Lu told NBC News.
While reiterating China's sovereignty and admitting its awareness of controversies concerning some islands that only began in the mid-1970s, Lu said countries in the region have reached agreements on how to handle disputes in a way to "serve the common interests, of both China and all the other countries in this region."
"Countries have already come back to the original agreement that maybe  for the time being we could set aside those sovereign disputes, and focus on some joint developments, and working together to maintain the peace and stability in this region," he said.
While stressing that any dispute is between China and those directly concerned countries, Lu also expressed China's hope for the United States or any other country from outside to respect the common wish and the common interests in this region.
In answering NBC's questions concerning China's reaction to possible policy options on China-U.S. relations by the administration of President Donald Trump, Lu said China will prejudge nothing.
On economic and trade relations, he expressed China's hope for better ties, while reaffirming China's intention not to have a trade war that Trump had threatened during his election campaign.
"That's in no one's interests, that will only do harm to both sides," he said.
However, avoiding a trade war needs efforts from both sides, he noted.
Lu said facts and figures have already shown that China-U.S. economic and trade ties have served the interests of both sides.
Bilateral trade ties have helped create 2.6 million jobs in the United States in a year alone, and reduced commodity prices for average American households, which each saved about 850 U.S. dollars in 2015.
Asked to comment on Trump's withdrawal from the Trans-Pacific Partnership (TPP) trade deal, Lu said China welcomes any effort toward regional economic integration, and that it thinks the TPP "does not fit the real conditions in this region."
Regarding the Taiwan issue, Lu reiterated China's stand on the one-China policy.
"This one-China policy has been at the cornerstone, or has been the fundamental basis for" the existing China-U.S. relationship and cooperation, he said.
"This issue touches upon China's core interests, by no means this is something that can be negotiated, or as a bargaining chip," Lu stressed.
On the nuclear issue on the Korean Peninsula, Lu said it was an issue originated from the disputes between the Democratic People's Republic of Korea (DPRK) and the United States. "The United States has more influence," he said.
As a neighbor of the DPRK, China cares much about the situation on the Korean Peninsula. "China has made our own efforts," he said, referring to the six-party talks that had led to agreements and for a time Pyongyang's commitment to abandoning its nuclear weapons program.
"Our very purpose is to find a visible way to get this issue resolved, rather than any other political agenda," Lu said.
China still believes in peaceful negotiations, he said.  (Xinhua News)