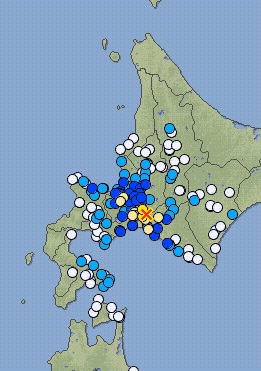 Tokyo- A strong earthquake with an estimated magnitude of 5.1 hit the Iburi region in the northern Japan prefecture of Hokkaido Saturday night.
The quake, which struck at around 11:45 p.m. (2:45 p.m. GMT), registered lower 5 on the Japanese seismic intensity scale of 7 in the town of Abira, the Japan Meteorological Agency said.
No tsunami warning was issued following the quake, whose focus was located at a depth of 27 kilometers.
A 68-year-old woman was sent to hospital after falling down stairs at her house in the city of Tomakomai, according to a local fire department. (Jiji Press)