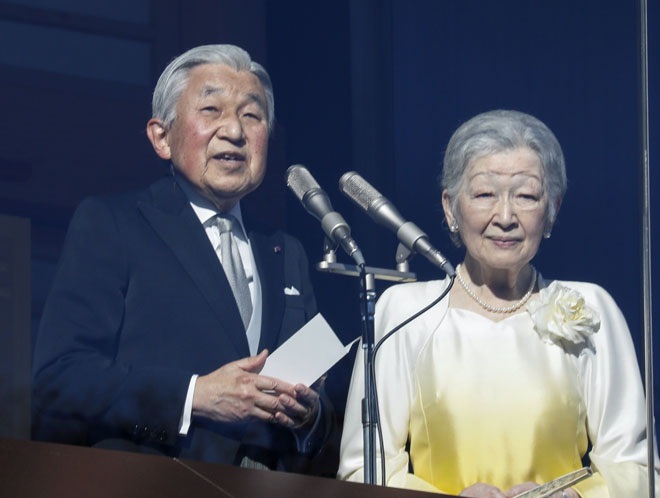 Tokyo--Japan was hit by numerous natural disasters, including earthquakes and eruptions, during the Heisei era, and Emperor Akihito and Empress Michiko have visited affected areas each time to offer encouragement to people staying at evacuation centers.

When talking to such evacuees sitting on the floor, they have often knelt down to get themselves to the same eye level.

The couple's policy of putting themselves into line with the mindset of the general public has been passed on to the generation of Crown Prince Naruhito and Crown Princess Masako, who are set to become Emperor and Empress on May 1, after the Heisei era ends when Emperor Akihito abdicates on April 30.

Nagasaki Prefecture, where volcanic eruptions occurred at the Fugendake peak of Mount Unzen in 1991, was the first disaster-hit area Emperor Akihito visited with Empress Michiko after ascending to the throne in 1989. A major pyroclastic flow that followed the eruptions took the lives of 43 people.

On July 10, 1991, only about a month after the deadly eruptions, the Emperor and Empress arrived in the southwestern Japan prefecture aboard a commercial flight, also taken by general passengers.

At the time, when eruptions and pyroclastic flows were yet to calm down, Kanichi Kanegae, then mayor of Shimabara, Nagasaki, greeted the Imperial couple and had lunch with them at a hotel in the city, which is located at the foot of Mount Unzen.

Although the hotel offered a special room on the fifth floor for the Emperor and Empress, they chose instead to stay in a regular room on the first floor.

Dishes of curry and rice were served for the two for lunch, but they did not eat much and instead asked many questions about the post-disaster situation.

Afterward, the Emperor, shirt sleeves rolled up, visited a temporary housing facility in a park, together with the Empress. At a gymnasium used as an evacuation center, the couple knelt down to talk to evacuees there. On this day, Kanegae wrote in his diary, "I felt more thrilled and thankful than ever today." Describing how the Emperor and Empress knelt and spoke to each of the evacuees, Kanegae also wrote that the couple touched everyone's hearts and that he felt Japan would be all right despite the major disaster. "Although I couldn't help feeling pessimistic back then, the Emperor and Empress gave me hope to carry on," Kanegae, 88, recalled. "Their visit became a basis for Shimabara's reconstruction."

The Great Hanshin Earthquake that hit Kobe in the western Japan prefecture of Hyogo and nearby areas on Jan. 17, 1995, left more than 6,400 people dead, the second worst total from a natural disaster after the 2011 earthquake and tsunami that mainly devastated northeastern Japan.

On Jan. 31, 1995, two weeks after the Hanshin quake, the Emperor and Empress flew to the affected region by a Self-Defense Force plane and a helicopter and visited evacuation centers in the cities of Nishinomiya, Ashiya and Kobe, all in Hyogo.

They also went to the Sugahara Ichiba market in Kobe that burnt down in a fire caused by the earthquake and offered silent prayers for the victims.

At the site, where the search for bodies was still continuing, the Empress laid a bouquet of narcissus grown in a garden of the couple's residence at the Imperial Palace in Tokyo.

The Emperor and Empress visited Awajishima, an island in Hyogo, as well, before returning to Tokyo in the evening.

They later said in a statement, released through the Imperial Household Agency, "We sincerely hope that people's lives in the affected areas will be put back in order as soon as possible and that peace and security will come."

In January 2005, after a memorial ceremony to mark the 10th anniversary of the major temblor, the Emperor and Empress held a meeting with representatives of bereaved families, where an elementary school student handed sunflower seeds to the couple.

The seeds were from sunflowers that had bloomed in the summer of the year of the earthquake at the site in Kobe where the house of Haruka Kato had collapsed, taking the life of the 11-year-old girl.

Residents of the area started a movement to give the seeds of "Haruka's sunflowers" to people across the country as a symbol of reconstruction.

The Emperor and Empress planted the seeds in a garden of their residence. The sunflowers increased in number and have also been planted in the East Gardens of the Imperial Palace, pleasing the eyes of visitors every summer. In the "utakai hajime" New Year's ceremony of "waka" Japanese poems held in January, the last such event during the Heisei era, a piece by the Emperor about Haruka's sunflowers was read out. Jiji Press