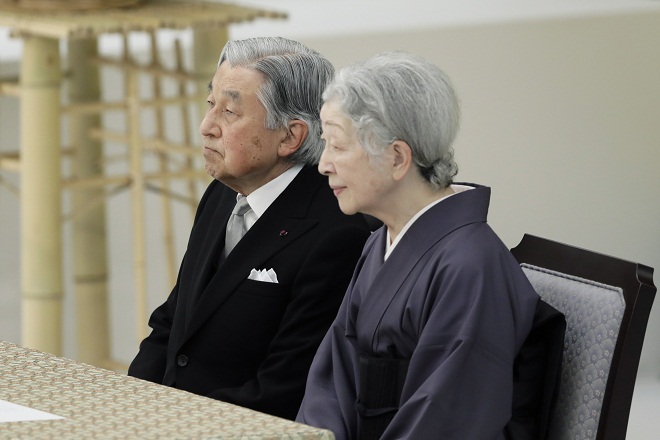 The Heisei Emperor : Wishing for peace, true to wartime memories

Tokyo--Emperor Akihito's starting point as the symbol of Japan wishing for peace dates back to his memories of witnessing wartime devastation in Tokyo when he was 11 years old.

The Emperor and Empress Michiko have repeatedly visited the bloodiest battlefields at home and abroad to mourn for victims of the Pacific War, part of World War II.

In the closing days of WWII, Emperor Akihito was evacuated to a series of places, including Numazu in Shizuoka Prefecture, central Japan, and Nikko in Tochigi Prefecture, eastern Japan.

At the age of 11, he was in the Okunikko district of Nikko when the war ended. He returned to Tokyo in November 1945.

"The scenery couldn't be imagined from present-day Tokyo," the Emperor has said on the shock he felt when seeing the destruction in Tokyo immediately after the war.

After Japan's defeat in the war, the Emperor's status changed to national symbol from the person with all sovereign rights.

His father, Emperor Hirohito, who had been considered a "living god" until the end of the war and is posthumously known as Emperor Showa, declared his humanity by renouncing divine status after the war, while visiting many parts of Japan.

As Crown Prince, the current Emperor also visited many places in Japan and abroad, paying a visit to Okinawa Prefecture for the first time in 1975 with Empress Michiko.

During their stay, a member of an extremist group threw a firebomb at the couple in front of a monument to remember the "Himeyuri" wartime nursing corps of female students and teachers in Itoman in Okinawa. The couple continued their tour as scheduled.

When he was Crown Prince, Emperor Akihito pointed to four days that should never be forgotten. They are the June 23 end of the Battle of Okinawa in WWII, the U.S. atomic bombings of Hiroshima on Aug. 6 and Nagasaki on

Every year, the Emperor has observed silent prayers on these days, even during overseas visits.

Emperor Akihito visited Okinawa in 1993 with Empress Michiko, becoming the first Emperor to visit the southernmost Japan prefecture, the site of the largest ground battle in the country during the war.

In 1994, the couple visited Iwojima, formally called Iwoto, a Pacific island that belongs to Tokyo, the site of a brutal battle during the war.

In summer 1995, which marked the 50th anniversary of Japan's surrender in the war, they toured Nagasaki, Hiroshima, Okinawa and Tokyo Memorial Hall, dedicated to victims of massive air raids on the Japanese capital during the war.

On the 60th war-end anniversary in 2005, the couple visited the Pacific island of Saipan, one of bloodiest battlefields of the war.

"Mourning for the war dead is a duty throughout the Emperor's whole life," said Makoto Watanabe, 82, who accompanied the couple on the Saipan tour as grand chamberlain to the Emperor.

During their Saipan visit, the couple made a bow toward the blue sea at Banzai Cliff, where many Japanese troops and civilians leaped to death, shouting the banzai cheers for Emperor Hirohito, rather than surrender to American troops.

The Emperor expressed his feelings at the time in a poem. The English version reads: "Down below this cliff / Multitudinous the lives / That people lost here / Where the ocean is so deep / And the seas are blue and clear."

"The trip left me with heavy-hearted as I thought of the severe combat 61 years ago," the Emperor recalled at a press conference held in December 2005.

The Emperor continued his tours to mourn for the war dead even after he underwent heart surgery in 2012, visiting Palau in 2015 and the Philippines in 2016, where many servicemen of the now-defunct Imperial Japanese military died. He also offered condolences to fallen U.S. troops and the Philippine war dead there.

Asked about events that had left special impressions over the past 80 years, the Emperor told a press conference for his 80th birthday in 2013, "I would say that what stands out most in my mind is the Second World War."

Even after the Emperor suggested in 2016 his wish to abdicate, the Imperial couple visited Okinawa in March 2018, their 11th visit to the prefecture. They prayed for the war dead at a battlefield in southern Okinawa and waved to people gathered at Naha Airport in the prefectural capital on the final day of their three-day trip.

"We are committed to continue to care for the sacrifices that the people of Okinawa have endured over the years, and that commitment will remain unchanged in the future," the Emperor said at a press conference in December last year before his 85th birthday. Jiji Press