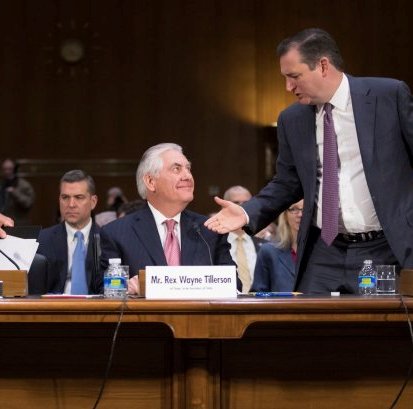 WASHINGTON- U.S. Secretary of State nominee Rex Tillerson on Wednesday affirmed Washington's commitment to the defense of Japan in the event that China attempts to seize the Japanese-administered Senkaku Islands in the East China Sea.
"We've made a commitment to Japan in terms of a guarantee of their defense," Tillerson said during his Senate confirmation hearing, when asked about the U.S. response to any Chinese attempt to take the islets by force.
His remark underscored that the uninhabited islets, claimed by China and Taiwan, fall under Article 5 of the Japan-U.S. security treaty. The affirmation came amid concern in Japan and other U.S. allies about President-elect Donald Trump's commitment to their security.
"We have long-standing ally commitments with Japan and South Korea in the area and I think we would respond in accordance with those accords," Tillerson said, in answer to a question by Florida Sen. Marco Rubio.
Responding to a question by Colorado Sen. Cory Gardner, Tillerson said Beijing's unilateral declaration in 2013 of an air defense identification zone overlapping Japanese airspace over Senkakus was "illegal."
Earlier in the hearing, Tillerson, a former chief executive of Exxon Mobil Corp., said U.S. alliances are "durable" and urged allies to play their part in managing alliances.
While noting U.S. allies "are looking for a return of our leadership," he also mentioned the need to "hold our allies accountable to commitments they make. We cannot look the other way at allies who do not meet their obligations."
Trump repeatedly demanded during the presidential campaign that U.S. allies such as Japan, South Korea and North Atlantic Treaty Organization members cover more of the costs associated with stationing U.S. forces -- or else defend themselves.
In the hearing, Tillerson criticized China's "illegal" island-building in disputed waters of the South China Sea and its reluctance to fully exercise its influence on North Korea to curb the country's nuclear and missile programs.
"The island building in the South China Sea itself in many respects, in my view, building islands and then putting military assets on those islands is akin to Russia's taking of Crimea" from Ukraine, he said.
Referring to U.S. interactions with China, which he said have been "both friendly and adversarial," Tillerson said Beijing's economic and trade practices "have not always followed its commitments to global agreements," and that the country "steals our intellectual property and is aggressive and expansionist in the digital realm."
Tillerson urged China to strictly implement U.N. Security Council sanctions resolutions so as to rein in North Korea's development of nuclear weapons and ballistic missiles, and get Pyongyang to act in accordance with international rules and norms.
"We cannot continue to accept empty promises like the ones China has made to pressure North Korea to reform, only to shy away from enforcement," he said.
"Looking the other way when trust is broken only encourages more bad behavior. And it must end."
Asked whether he shares Trump's opposition to the Trans-Pacific Partnership free trade agreement, Tillerson said, "I do not oppose TPP," but added he shares some of Trump's view about whether the pact as negotiated reflects all the best interests of the United States.
Trump has pledged to withdraw the United States from the TPP, which also involves Japan and 10 other nations, once he takes office on Jan. 20.
As if to dismiss concern that he has close ties with Russian President Vladimir Putin, the secretary of state designate appeared to show a tough stance toward Moscow, as he did on Beijing and Pyongyang.
Tillerson said he will "never recognize" Russia's unilateral annexation of Ukraine's Crimea region in 2014 and that the United States and other countries should maintain sanctions against Moscow.
At the same time, he referred to the need to have "an open and frank dialogue with Russia regarding its ambition so that we know how to chart our own course."
Tillerson advocated conducting a more assertive foreign policy than that of departing President Barack Obama, saying "American leadership must not only be renewed, it must be asserted" to ensure global peace and security.
"If we do not lead, we risk plunging the world deeper into confusion and danger," he said. "Our adversaries have been emboldened to take advantage of this absence of American leadership."
Asked about the use of force when deemed necessary, Tillerson stood by it as an available option. "Diplomacy will be ineffective if it's not backed up by force," he said. (Kyodo News)