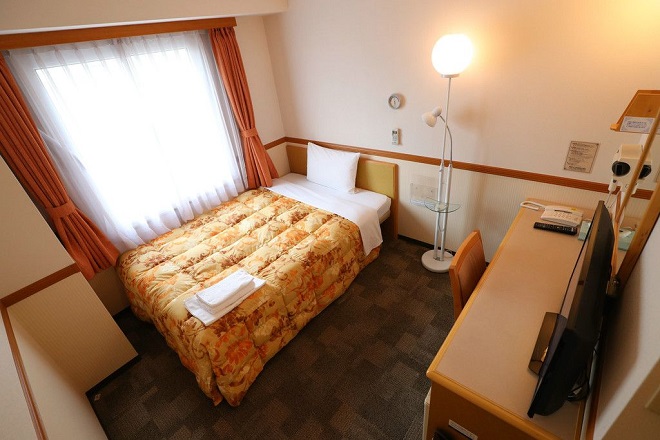 Tokyo- The Tokyo metropolitan government showed the press on Tuesday the rooms of a budget hotel that is expected to house some 100 patients infected with the novel coronavirus.

The Toyoko Inn Tokyo-eki Shin-ohashi Mae building in Chuo Ward will be leased to the metropolitan government, which will use the hotel's 208 rooms to house asymptomatic patients or those with fevers below 37.5 degrees Celsius and with improving respiratory symptoms.

Around 10 patients are scheduled to be transported to the hotel from their respective hospitals the same day.

Patients will be prohibited from exiting the hotel during their stay, and meals will be provided on the first floor for them to retrieve.

Two nurses will be stationed at the hotel at all times to check the patients' health conditions, while a doctor will be at the site during the day. Patients whose conditions worsen during their stay will be transported to a hospital.

The press was shown 19 rooms on the fourth floor of the hotel. The rooms were equipped with a bed, a television and a refrigerator. A poster asking guests not to walk around was put up in the hallway.

A 50-year-old male company employee playing with his seven-year-old daughter in a nearby park expressed worries about the use of the hotel to house patients.

"I want to know how the patients will use the hotel," he said. "Will they walk around outside?"

"It's important to help each other, especially during times like these," a 47-year-old male company employee who lives close to the hotel said. "It's a good thing that the space is being used effectively." Jiji Press