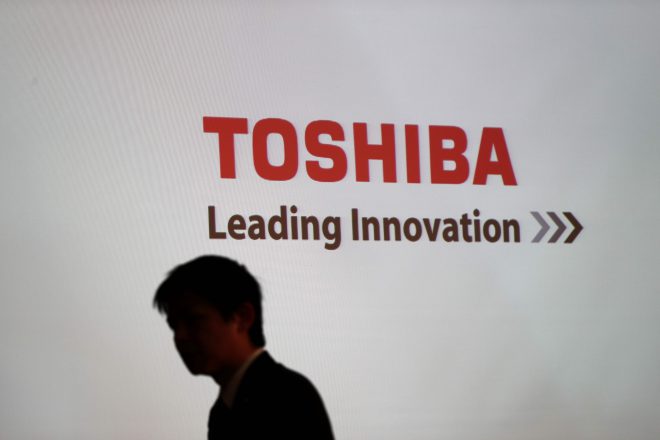 Toshiba says it will split four in-house units into subsidiaries

Tokyo- Struggling major Japanese electronics and machinery maker Toshiba Corp. said Monday that it will split four key in-house units, including infrastructure operations, into subsidiaries as part of its business reconstruction efforts.
Through the measure, Toshiba aims to effectively maintain its special construction business licenses that are necessary for electric power and large-scale projects.
Toshiba will separate its infrastructure, semiconductor and information and technology units on July 1.
After winning approval at a shareholders' meeting, Toshiba plans to split its energy and domestic nuclear plant operations into one company on Oct. 1.
Toshiba will transfer some 20,000 of its 24,000 employees to the four new companies. It has currently no plans to reduce payrolls including through early voluntary retirement.
Toshiba's estimated excess debts over assets stood at 620 billion yen at the end of fiscal 2016, which closed in March.
Under the construction business law, companies undertaking a project worth 40 million yen or more as subcontractors are required to obtain special construction business licenses.
But it appears difficult for Toshiba to renew its licenses under the current circumstances. If the licenses are lost, Toshiba's annual sales are expected to drop by 900 billion yen.
Toshiba aims to effectively maintain licenses through subsidiaries with healthy finances in order to continue the group's energy, infrastructure and other operations.
Among its semiconductor operations, Toshiba split its mainstay flash memory business on April 1. It is working to select the buyer of the flash memory company to secure funds to improve its own financial condition, which deteriorated due chiefly to massive losses at its nuclear operations in the United States. (Jiji Press)