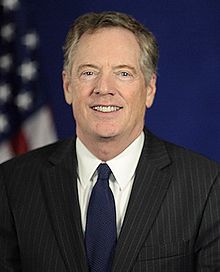 WASHINGTON- U.S. President-elect Donald Trump is expected to tap former trade official Robert Lighthizer as the country's next trade chief, media outlets reported Monday. Lighthizer served as deputy U.S. trade representative under President Ronald Reagan in the 1980s and supports Trump's protectionist trade policy, the media reports said. "Mr. Lighthizer will be part of a revamped team whose mission includes confronting China and Mexico, which Mr. Trump contends have taken advantage of the U.S. under current trade agreements," The Wall Street Journal said. A trade lawyer, Lighthizer was "an early supporter of Trump and had been advising the incoming administration on its transition efforts," Politico said. Trump has pledged to withdraw the United States from the already signed Trans-Pacific Partnership free trade pact with Japan and 10 other countries on the day of his inauguration, challenging outgoing President Barack Obama, who regards the pact as a key component of his policy of focusing on Asia. With the Abe administration taking steps to reform working conditions, 62 companies hoped for a friendlier working environment for women and young workers and 46 companies called for addressing long working hours. As the government seeks ways to tighten a ban on excessively long working hours, 42 companies supported capping working hours while 15 firms opposed doing so. When asked about planned recruitment of students graduating in the spring of 2018, 38 companies forecast no change in the number to be hired while only three expected to increase hiring. No companies said they will cut back on recruitment and 64 companies said they were undecided. (Kyodo News)