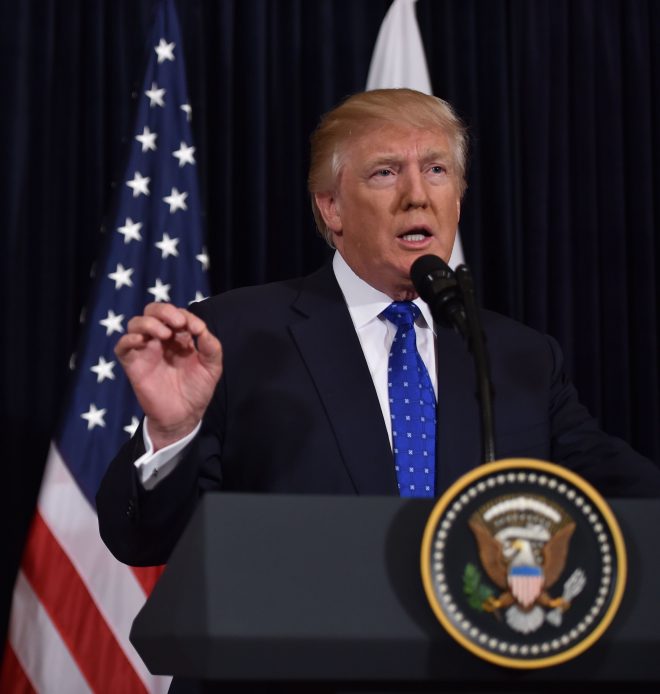 Washington- US President Donald Trump’s pro-Japan remarks at a joint press conference with Japanese Prime Minister Shinzo Abe on Friday have surprised many foreign affairs officials in the two countries and, then, made them less fearful about the future course of the Japan-US alliance, although concerns about a sudden change in his attitude still linger. During his presidential campaign, Trump attacked Japan for not spending enough for US forces stationed there and demanded Japan pay much more with a threat to pull the forces out of the country. He even indicated he would allow Japan to go nuclear. But at the news conference in Washington, held after his first summit with Abe, Trump said, “I also want to take this opportunity...to thank you (Abe) and the people of Japan for hosting our armed forces.” Japanese and US officials were stunned by this amicable comment, and they were also encouraged by other remarks and moves made by Trump regarding the alliance. The new president reaffirmed at the press conference that his country is “committed to the security of Japan and all areas under its administrative control,” including the Senkaku Islands, which are claimed by China. Trump gave the nod to Japanese proposals to issue a joint statement after the summit and have the statement clarify his opposition to “any unilateral action that seeks to undermine Japan’s administration” of the East China Sea islets. A Japanese diplomatic source said the Trump administration is far more pro-Japan than the administration of his predecessor, Barack Obama, who had not easily come to stand behind Japan over the island problem, although it eventually issued a similar statement. Some people in Washington see the Trump administration finally adopt Republicans’ traditional foreign policy approach. Michael Green, former director of Asian affairs at the US National Security Council, said Trump looked like a mainstream Republican president at the press conference. The prominent Japan expert pointed out that Trump changed after receiving lecture on international situations by Defense Secretary James Mattis, who visited Japan and South Korea ahead of the Abe-Trump summit. Some pundits believe Trump wants to exhibit his ability to well handle foreign affairs while facing difficulties in carrying out his policies on the domestic front, such as a travel ban on people from seven Muslim-majority countries. Trump has also been criticized for a delay in his administration’s formation. On the eve of the summit with Abe, Trump told Chinese President Xi Jinping in their first telephone talks that the United States will continue supporting the “One China” policy, a major shift in his stance on China and Taiwan. Furthermore, reportedly he is reviewing policies toward Israel and Iran. Still, it is uncertain whether Trump will maintain such a well-measured foreign policy approach. (Jiji Press)