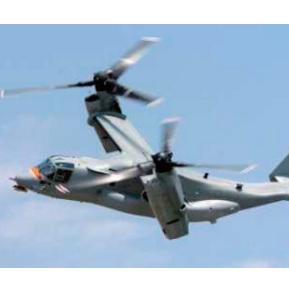 TOKYO- The U.S. military will resume aerial refueling exercises for Osprey aircraft stationed in Japan's Okinawa Prefecture from Friday, less than a month after the crash-landing of one of the tilt-rotor aircraft in nearby waters, Japan's Defense Ministry said Thursday. The ministry said it has confirmed that the United States has taken all measures to prevent a recurrence of the Dec. 13 accident that occurred during a refueling drill. But the announcement has angered the local government which continues to express concerns about the aircraft's safety. "Has (the Japanese government) thought about the feelings of the people in this prefecture? We want the central government to not just agree to everything that the U.S. military says, but see this issue with our eyes," Okinawa Deputy Gov. Mitsuo Ageda told reporters. The Okinawa government was already angered by the central government allowing the U.S. forces to resume flying Ospreys less than a week after the accident. The accident has also led Okinawa Gov. Takeshi Onaga to step up calls for the removal of all MV-22 Osprey aircraft deployed at the U.S. Marine Corps Air Station Futenma. In the Dec. 13 accident, the aircraft's propeller was damaged after cutting a hose extended from a refueling plane. The aircraft, having become unable to fly stably, crash-landed in shallow waters off the coast of Nago, with two of the five crew members injured. While an investigation into the accident is continuing, the United States has pointed to human error, turbulence and the complex process of nighttime air refueling as possible causes of the accident, according to the Japanese ministry. The Japanese ministry said the United States has taken "a broad range of measures believed to be effective" to its military personnel to prevent an accident, including simulation training. "We believe these measures are reasonable in light of theexpertise and experience of the Defense Ministry and the Self-Defense Forces," Defense Minister Tomomi Inada, who is on a European tour, said in a statement. She also said the midair refueling training will continue to only be conducted in areas away from land. The ministry argues that the deployment of Ospreys helps improve the deterrence of the Japan-U.S. alliance, also saying the transportation aircraft is useful in dealing with natural disasters and other emergency situations. The aircraft can hover like a helicopter but fly faster and over longer distances, like a fixed-wing aircraft. Ospreys have been unpopular among the people of Okinawa due to their noise and record of accidents overseas. The Dec. 13 incident -- the first major accident involving the aircraft in Japan since the start of their deployment in 2012 -- reignited the safety concerns because the southern island prefecture hosts the bulk of U.S. military facilities in Japan. The U.S. military resumed Osprey flights in Okinawa on Dec. 19, saying the accident was not caused by any problem with the aircraft itself. But it continued to suspend refueling training. The U.S. forces in Japan will be ready to conduct refueling drills on Friday, but the actual operations may take place after that day depending on the weather conditions and other factors, according to a Japanese Defense Ministry official. (Kyodo News)