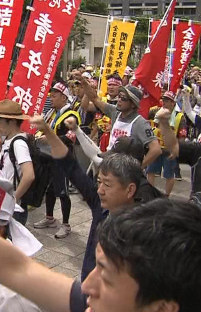 NAHA, OKINAWA PREF.- Okinawa on Monday marked the 45th anniversary of its return to Japanese administration from US rule, but US military bases in Japan remain heavily concentrated in the southernmost island prefecture.
Okinawa, which occupies only 0.6 percent of Japan's total land area, hosts 70 percent of US military facilities in the country.
The Japanese government has stressed its efforts to reduce this burden on Okinawa. But the reality is that residents are still forced to lead lives alongside US bases.
The US military deployed the Osprey tilt-rotor transport aircraft, once nicknamed the Widowmaker due to a series of accidents during development, in the prefecture in 2012. The construction work for relocating the US Marine Corps' Futenma air station within Okinawa kicked off last month despite local opposition.
Symbolizing the US military's heavy presence in Okinawa are the long base fences along Route 58, a main road that cuts lengthwise through Okinawa's main island, and the common sight of large US military vehicles on public roads.
On the morning of April 19 this year, a US military truck became stranded in front of Kadena Primary School in the town of Kadena in southern Okinawa after it entered a school road by mistake.
"Japan and the United States have agreed to make large vehicles take detours, but the promise is not being kept," said an official from the town's education board. "We're worried about the situation in terms of school safety."
Four years ago, there was an incident in which a large US Marine Corps bus entered the grounds of the same elementary school and damaged a flowerbed and faucet as it tried to turn around.
Since April, parachute training has been conducted repeatedly at the US military's Kadena Air Base, which straddles the city of Okinawa and the towns of Chatan and Kadena. Local residents are very concerned about the possibility of accidents.
In 1965, before the reversion of Okinawa to Japan, an elementary schoolgirl died in the village of Yomitan after being hit by a US military trailer dropped with a parachute.
The United States has agreed to conduct the parachute exercise at an auxiliary airfield on Iejima, an islet near the main island of Okinawa. But the US military has been conducting the exercise at the Kadena base as an exceptional event. (Jiji Press)