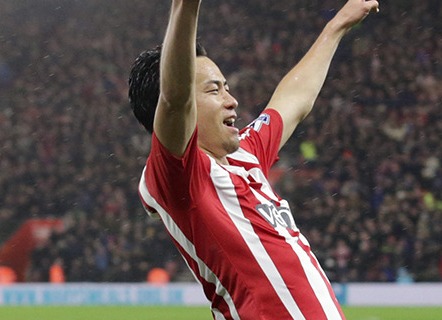 LIVERPOOL, England - Japan defender Maya Yoshida bagged his first goal of the season on Saturday but also played a part in letting in a late equalizer as Southampton drew 2-2 away to Championship side Norwich in the FA Cup third round. Yoshida met Pierre-Emile Hojbjerg's cross with a thumping header to hand the a Saints 2-1, 67th-minute lead, but left Steven Naismith totally unmarked in the 92nd minute outside the six-yard box as the Scotland forward headed home to force a replay on Jan. 18. Both center-halves got on the score sheet for the visitors as Virgil van Dijk volleyed home Dusan Tadic's cross at the far post in the 38th minute. But poor control by keeper Harry Lewis on a backpass forced him to bring down Cameron Jerome for a penalty that Steven Whittaker converted in the 52nd minute. (Kyodo News)