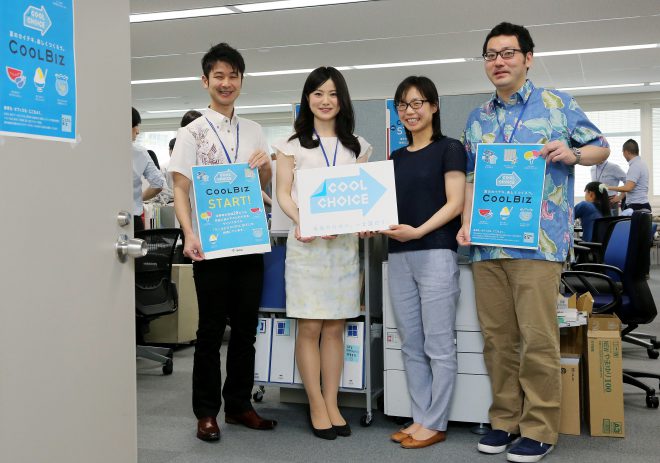 Tokyo- This year's Cool Biz campaign, designed to encourage workers to dress lightly during summer to save electricity, started in Tokyo's Kasumigaseki government district on Monday.
Many male employees at government agencies showed up without ties on. Some at the Environment Ministry, which spearheads the campaign, were seen wearing "kariyushi" traditional shirts from the southernmost prefecture of Okinawa. Cool Biz will be in effect until Sept. 30.
Cool Biz is one of measures taken in Japan to combat global warming. Office workers are encouraged to wear light clothes while air conditioning is set to 28 degrees Celsius to reduce electricity use.
"Thank goodness for short-sleeve shirts, since today is hot and the sun is strong," said Environment Ministry official Akifumi Shimizu, who came to work in an aloha shirt that was a present from his wife.
Cool Biz, launched in 2005, is practiced at around 70 pct of workplaces in Japan.
The Japanese government has called on employers to allow workers to continue to dress lightly on warm days in October, instead of adjusting the air conditioning. (Jiji Press)