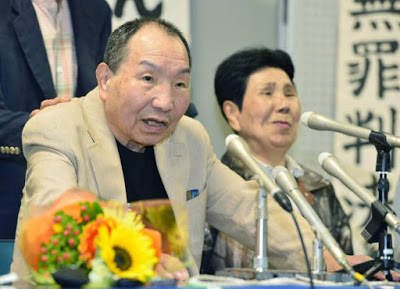 TOKYO- The annual Death Penalty Movie Week will be held at a Tokyo theater in February, with eight films from home and abroad providing viewers with an opportunity to think about the "right to life." The event will take place as pro- and anti-death penalty groups have been facing off at symposiums and on other occasions since the Japan Federation of Bar Associations declared in October it would work for the abolition of capital punishment by 2020. The eight films to be screened include 2005 German movie "Sophie Scholl -- The Final Days," which depicts the anti-Nazi struggle of a student who was executed, and "Freedom Moon," produced in Japan in 2016, that recounts the life of death row inmate Iwao Hakamada. Hakamada, convicted of a 1966 quadruple murder, was released in 2014 after a court decided to reopen the case, but he still remains on death row as prosecutors have appealed the ruling. The film shows how his mental state has deteriorated due to decades-long solitary confinement and the endless fear of execution. South Korean popular movie "Miracle in Cell No. 7," produced in 2013, will also be screened during the sixth event. "Murder victims are deprived of their lives unjustifiably, but offenders are also robbed of their 'right to live' under capital punishment," said Masakuni Ota, one of the event organizers. "People seem to accept such circumstances without question, at a time when exclusion and intolerance are prevalent around the world." During the event from Feb. 18 to 24 at the Eurospace movie theater in Tokyo's Shibuya district, four movies will be shown each day, accompanied by sessions with guest speakers. The scheduled speakers include actress Kirin Kiki, who played the mother of a death row inmate in a movie based on a true story, and pop singer Tsuyoshi Ujiki, whose father was convicted of war crimes after World War II. "We welcome both those seeking abolition of the death penalty and those who support or accept capital punishment" so the issue is discussed from various viewpoints, Ota said. The previous five Death Penalty Movie Week events attracted a total of around 6,000 viewers. In the four years since Prime Minister Shinzo Abe returned to power, 17 inmates have been hanged, with a government survey showing over 80 percent of people in Japan support the death penalty. On the other hand, Tokyo was urged by the U.N. Human Rights Committee in 2014 to "give due consideration to the abolition of the death penalty." Currently, more than two-thirds of nations have abolished the death penalty by law or in practice. For further information on the screenings, call Eurospace at 03-3461-0211 or check its website at http://www.eurospace.co.jp/