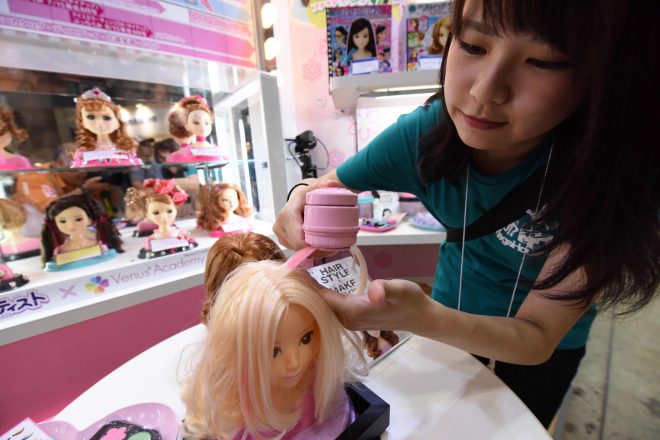 Tokyo- The International Tokyo Toy Show 2017, one of the largest toy trade fairs in Japan, opened Thursday for a four-day run at Tokyo Big Sight in the capital's Koto Ward, featuring some 35,000 items. The items on display at the event, hosted by the Japan Toy Association, include the modernized versions of the Plarail railroad toy and Licca dress-up doll series, which are familiar to grown-ups as well as children. Exhibitors hope to attract not just kids but their parents amid the shrinking domestic toy market due to a low birthrate.

The new version of Plarail features miniature locomotives of Thomas the Tank Engine characters that run while giving off vapor that resembles steam. The latest Licca doll, which marked its 50th anniversary this year since its launch, can temporarily change its hair color from pink to blue when users shine a special penlight on it. Also on display is a new baseball pinball machine equipped with a color electric scoreboard. Toys utilizing cutting-edge technologies are increasing their presence as well. Such toys include a helicopter that automatically follows the user holding its controller. The show is open to industry professionals on the first two days before opening to the public on the weekend for free. The association expects 160,000 visitors during the four days, the same level as last year. (Jiji Press)