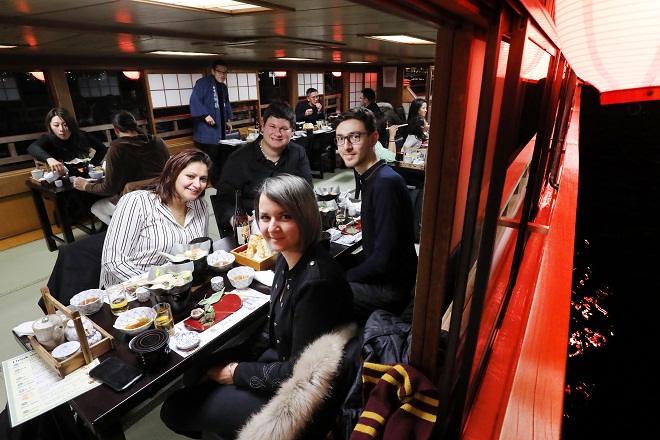 Tokyo- The Japan Tourism Agency and municipalities in Tokyo are working to beef up night tourism attractions for visitors from abroad in the run-up to the Tokyo Olympics and Paralympics this summer.

In a survey of 10,000 foreign visitors conducted by the agency in fiscal 2018, many respondents said they want to enjoy night entertainment. At the same time, the survey showed that the proportion of foreigners who actually experienced night entertainment activities and that of respondents who joined such activities and had a sense of satisfaction were low compared with similar surveys carried out in other countries.

In summer 2019, the monthly Edo Tokyo Night Market started at Kanda Myojin, a Shinto shrine in Tokyo's Chiyoda Ward, as a model event designated by the agency, offering such fun experiences as "kingyo sukui," or goldfish scooping, as well as food stalls, including for "yakisoba" fried noodle. In addition, traditional local dances, such as "Awa Odori" in the western Japan prefecture of Tokushima, are performed.

Holding the event every month allows more and more foreigners to get in touch with Japanese culture, officials said.

"We hope a number of foreigners will experience 'ennichi' culture at Kanda Myojin, which is close to Akihabara, a pop culture hub crowded with visitors from abroad, and hosts Kanda Matsuri, one of the three great festivals in Japan," Masaharu Iwata, 54, an official of CoCoRo, an organizer of the Edo Tokyo Night Market, said. "We also want visitors to have interests in local festivals." Ennichi refers to a day closely related to a Japanese deity, and a festival featuring food stalls and items such as goldfish scooping is held on many such days.

In Tokyo's Shinagawa Ward, about 10 operators of "yakatabune" roofed pleasure boats started to offer a new night cruise every Tuesday from October 2019, with the service backed by subsidies from the government of the ward.

Yakatabune boats are mainly chartered by large groups of people for such events as cherry blossom-viewing and year-end drinking parties, and small groups of travelers often find it difficult to use them.

Meanwhile, the new night cruise is not a chartered service and therefore allows a range of customers, including individual and group travelers, to share the cruise experience.

Participants in the cruise, among other things, can taste freshly fried tempura and experience some traditional Japanese ceremonies while watching a night view of Tokyo from the sea. An English explanation on the route of the cruise is available.

While the night cruise project is set to run until the end of March, the parties concerned hope to continue the service later.

"We'll continue efforts so that many foreign visitors will experience the cruise and spread the fun of yakatabune and the night voyage will continue to be a key tourism feature in Tokyo after the Olympic and Paralympic Games,"Yasuyuki Miyake, 48, an executive of a group organizing the night cruise, said. Jiji Press