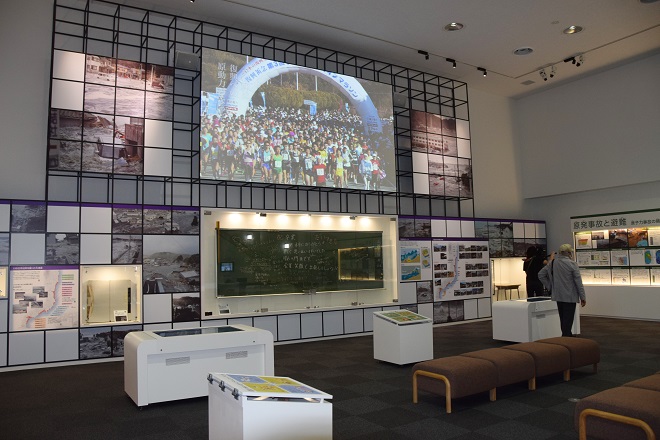 "We'll use it as a base to cultivate awareness for disaster prevention in order to develop a community that will be strong enough to overcome disasters," Iwaki Mayor Toshio Shimizu said in a ceremony to celebrate the opening of the Iwaki 3.11 Memorial and Revitalization Museum.

Yukinaga Suzuki, 67, head of the local district, expressed hope that visitors will understand how tragic the disaster was through video materials and learn about it to ensure that there are no victims in the future.

Displays at the museum show the damage caused by the tsunami and how the northeastern Japan city accepted people forced to evacuate due to the triple meltdown at Tokyo Electric Power Company Holdings Inc.'s <9501> Fukushima No. 1 nuclear plant, which occurred shortly after the quake and tsunami.

The museum also displays a blackboard and desks used at a local junior high school that was demolished after being damaged in the disaster.

It also features a section in which visitors are able to see through virtual reality the school building being flooded.

The facility plans to hold lecturing tours of the coasts led by guides who pass on their stories to others, as well as events related to disaster prevention.

The museum is also preparing an online archive for documents it has collected, in hopes that the materials will be used in academic research.

In Iwaki, 467 people lost their lives due to the tsunami or from causes related to the disaster. The city built the museum as part of its projects to preserve the memories of the disaster. Jiji Press