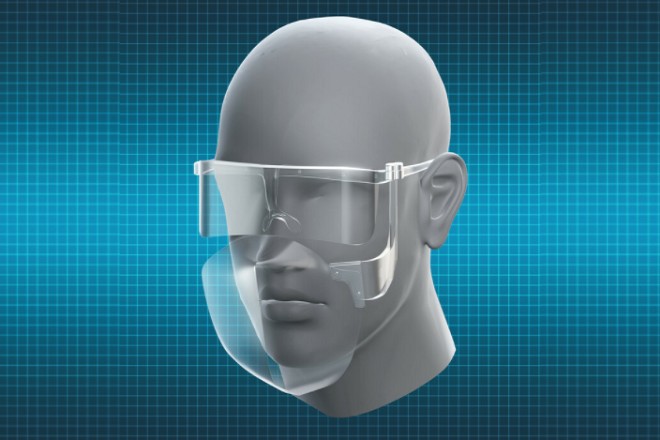 Tokyo- Suntory Liquors Ltd. and Toppan Printing Co. said they have developed a face shield that can be worn while eating, using data from simulations by the Fugaku supercomputer.

The new product, announced Tuesday, comes as eateries struggle with measures to prevent the spread of the novel coronavirus among their customers.

The large, bowl-shaped face shield can block some 70 pct of droplets dispersed from the wearers' mouths, the companies said.

The face shield is made of a clear material so that people can see the wearers' facial expressions, and its mouth area can be opened easily to allow people to eat while wearing it.

The shape of the face shield was designed based on the results of the Fugaku simulations conducted by a research team led by Makoto Tsubokura of the Riken Center for Computational Science.

The supercomputer calculations found that, while face shields only covering the mouth can only block around 30 pct of droplets, a bowl-shaped shield which reaches the nose and chin as well can block about 70 pct of droplets.

Suntory Liquors and Toppan Printing plan to make the finalized design of the face shield public so that other manufacturers can also produce the protective wear.