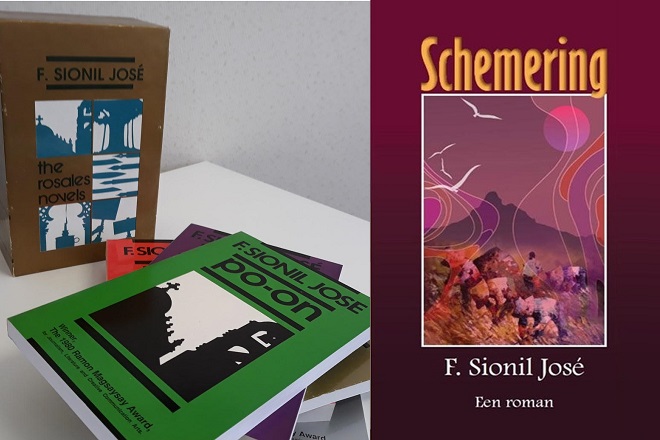 THE HAGUE- The Philippine Embassy in The Hague congratulated Mr. Gerard Arp, a Dutch writer and translator, for the successful release of his latest publication, Schemering, the Dutch translation of the novel "Po-on" by F. Sionil Jose, coinciding with the celebration of the Philippine National Heritage Month.

"Po-on" is the first of the five novels of F. Sionil Jose that make up the Rosales Saga, a Philippine political and historical epic spanning the end of the Spanish colonial period to the years after the country's independence.

According to Mr. Arp, the renowned Filipino author, who was informed about the project to translate “Po-on” over a year ago, gladly received the news noting that two other novels of the Rosales Saga, namely “Maskerade” (The Pretenders) and “Mis in Manila” (Mass), were published in Dutch in 1980 and 1982 respectively.

In his letter, Philippine Ambassador to the Netherlands Jaime Victor B. Ledda expressed his highest appreciation to Mr. Arp for his invaluable and immense contributions in support of the Philippine Embassy's cultural diplomacy efforts.  His Dutch translations of the novels of Philippine national hero Dr. Jose Rizal and now of F. Sionil Jose, Philippine National Artist for Literature, certainly promotes greater awareness and interest in Philippine history and culture in The Netherlands.

On 20 June 2019, the Philippine Embassy helped launch Mr. Arp's translation of “Noli Me Tangere” (Raak Me Niet Aan) during its National Day diplomatic reception. This was followed by the presentation of “El Filibusterismo in Dutch” (De Revolutie) on 06 February 2020 at a forum organized with the Knights of Rizal The Hague Chapter in the Sophiahof Museum.