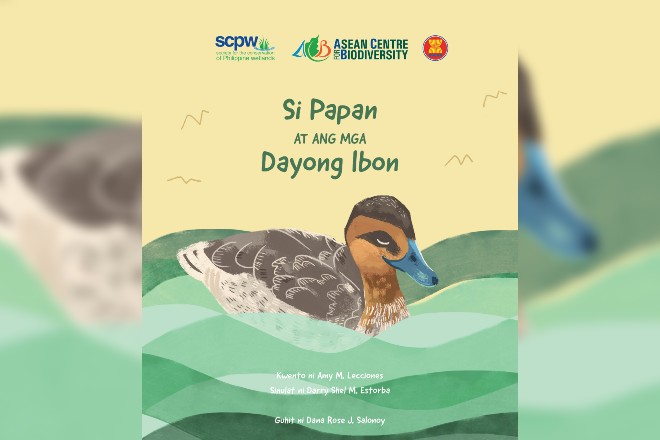 Learning about nature may be challenging under COVID-19 stay-at-home restrictions, but the Society for the Conservation of Philippine Wetlands (SCPW), in partnership with the ASEAN Centre for Biodiversity (ACB) found fun ways to do it while cultivating the children’s sense of adventure.


Through a combination of technology and old-school story-telling style, grade-schoolers were introduced to some of the migratory birds, their connection to human and environmental health, and the reason for their conservation, during the celebration of the World Migratory Bird Day (WMBD) on 10 October.


The SCPW and the ACB launched a children’s book on migratory birds titled, “Si Papan at ang mga Dayong Ibon” during the webinar “Click it, Sketch It: An Adventure with Migratory Birds”.


The book narrates the adventures of Papan, a Philippine duck in the Candaba marshlands, and the migratory birds Takyad, a Black-winged Stilt and Kalay, a Far Eastern Curlew. Takyad flew from Alaska, where the changing climate caused their late winter migration to the south. Meanwhile, Kalay faced a number of difficulties during their migration from Siberia to Australia, including being hunted by humans and facing pollution in their feeding areas and the declining number and quality of staging sites. In the story, the migratory birds and the endemic duck lamented their dwindling population despite the important roles they play in maintaining ecological balance.


“The survival of migratory birds is intricately connected with ours,” said ACB Executive Director Theresa Mundita Lim, underlining to the WMBD theme, “Birds Connect Our World.” “Tangible benefits can be derived from their protection such as ensuring genetic diversity and gene flow and preventing spillovers of zoonotic diseases such as COVID-19 by keeping viruses within their natural hosts, to name a few.”


Drivers of biodiversity loss such as human encroachment, land-use conversion, and hunting and poaching continue to persist, contributing to the decline in numbers of these ecologically valuable birds, she said.


Global data sources show that in the ASEAN region, 70 migratory species from a total of 510 have been listed as critically endangered, endangered, vulnerable, and near threatened.


The ASEAN region, being one of the important flyway sites along the East Asian-Australasian Flyway, is rich with wetlands, home to 60 per cent of tropical peatlands and 42 per cent of mangrove forests in the world. All these ecosystems serve as habitats for local birds, and migration sites for migratory species. Conserving these ecosystems is therefore connected to keeping these birds safe and their population thriving.


According to the ACB, the ASEAN Member States remain hopeful and continue to look for creative and efficient ways to achieve the region’s biodiversity conservation targets. The number of Ramsar sites––or wetlands of international importance, has grown with 25 new designated sites over the past decade. At present, the region has a total of 56 Ramsar sites, covering an estimated area of 2.6 million hectares.


“These favourable circumstances offer an optimistic glimpse of the conservation of migratory birds and the protection of ecosystems,” Lim said.


Other efforts are being done in the region, including facilitating cooperation and research through the ASEAN Flyway Network; protected areas and ecosystems conservation through the ASEAN Heritage Parks (AHPs) Programme; and mainstreaming of biodiversity across diverse sectors and segments of society, including youth.


Under the AYBP, the ACB will likewise serve as an adviser to this year’s Flyway Youth Forum, the first-ever international youth event on migratory waterbirds and wetland conservation in the East Asian-Australasian Flyway.


“With this book, we hope to ignite the children’s appreciation for birds and biodiversity,” Lim said. “It is never too early to start developing the love for nature. It is from this appreciation that we can foster a deeper understanding of its value and vital connection to our lives.”


Based on a story developed by the SCPW Executive Director, Ms. Amy Lecciones, Darry Shel Estorba and Dana Rose Salonoy collaborated on writing and illustrating the storybook on migratory birds.


“The SCPW hopes to continue collaborating with ACB in communicating the importance of wetlands and biodiversity through various media and catering to various audiences,” said Lecciones. “This children’s storybook is part of our efforts to come up with communication materials that will appeal to our young audience and have an even broader reach if it will be translated into other ASEAN languages.”

The virtual launch of the publication featured a storytelling session among the young audiences from all over the country including a group from the New Faith Children’s Home Foundation, performances from the children, and a colouring activity.

A video on migratory birds produced by the East-Asian Australasian Flyway Partnership and localised by SCPW was also shown during the event.