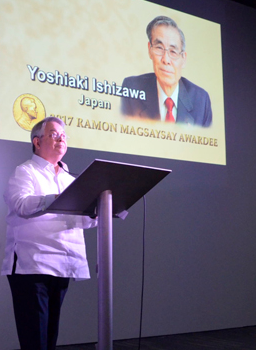 MANILA- Yoshiaki Ishizawa, who worked for decades to save Cambodia's Angkor archaeological site, is among the winners of this year's Ramon Magsaysay Award, known as Asia's version of the Nobel Prize, the award organizer said Thursday.
Born in Obihiro in the northernmost prefecture of Hokkaido, the 79-year-old professor at Japan's Sophia University has been engaged in research into Angkor, a UNESCO World Heritage site, since his visit to the Angkor Wat temple complex in 1961.
In 1980, Ishizawa entered Cambodia in the midst of a civil war and reached out to the world to warn of the ruinous state the heritage site had fallen into.
He also made efforts to train specialists in preservation of monuments in Cambodia.
The Ramon Magsaysay Award Foundation cited Ishizawa's "inspiring leadership in empowering Cambodians to be proud stewards of their heritage" as a reason for choosing him among this year's six winners--five individuals and a group.
The foundation also recognized "his wisdom in reminding us all that cultural monuments like the Angkor Wat are shared treasures whose preservation is thus, also our shared global responsibility."
The award-giving ceremony will be held on Aug. 31 in Manila.
The Magsaysay Award was established in 1957, in honor of former Philippine President Ramon Magsaysay. The award is given to individuals and groups for their achievements in fields such as social services, peace and international understanding.
Past Japanese winners include former Hiroshima Mayor Tadatoshi Akiba. The Japan Overseas Cooperation Volunteers, a project of the government-affiliated Japan International Cooperation Agency, was among last year's winners.