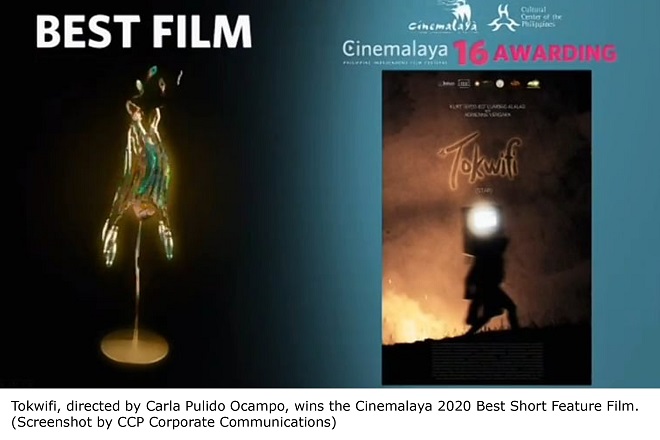 Directed by Carla Pulido Ocampo, Tokwifi was cited for its “highly original take on love between two persons coming from different eras and worlds, and how modernity and tradition could best be bridged by common humanity.”

A film about an unlikely love story between a 1950s mestiza star trapped inside a television set that fell from the sky and a Bontok Igorot man who doesn't know how to kiss, the film also won received the NETPAC Award for its magical but very convincing depiction of how women are boxed into stereotypes by television and how cultural communities are reduced into backward primitivism by the media.

NETPAC (Network for the Promotion of Asia Pacific Cinema) is a worldwide organization that promotes a greater understanding and appreciation of Asian films and filmmakers.

Filmmaker Martika Ramirez Escobar took home the Balanghai trophy for Best Direction for her film Living Things. She has “effectively orchestrated the resources of cinema in its whimsical yet convincing tale of how two people in love confront the challenges of change by even more love and devotion.” Her film is about a woman who discovers that her decade-long lover has turned into a cardboard standee.

Best Screenplay award went to Pabasa Kan Pasyon, a film by Hubert Tibi. It was cited for its “moving tale of mother and son struggling to survive amid the sounds and sights of lent in the Philippine countryside.” The film follows a Bicolano family that turns to religion to make both ends meet.

Reeden Fajardo's Quing Lalam Ning Aldo brought home the Audience Choice Award. He receives a certificate and Php50,000 cash prize. The heartwarming tale of a transgender sampaguita farmer who decides to renovate their neglected kitchen as soon as she hears that her son is coming home endears the film to the audience.

Joanna Vasquez Arong's Ang Pagpakalma Sa Unos received the Special Jury Prize for “its moving account through the eyes of a child of the ravages wrought by the strongest typhoon ever recorded in human history, its poignant poetry losing none of the event’s immediacy and tragedy.” She will take home a Balanghai trophy, Php60,000 cash prize, and DCP mastering package, worth Php25,000, from Central Digital Lab.

The Cinemalaya continues to screen on Vimeo until August 16. For those living outside the country, you can catch the global premiere of Cinemalaya on the Filipino Channel (TFC) from August 17 to 31, and on iWanTV from August 24 to September 7, 2020.