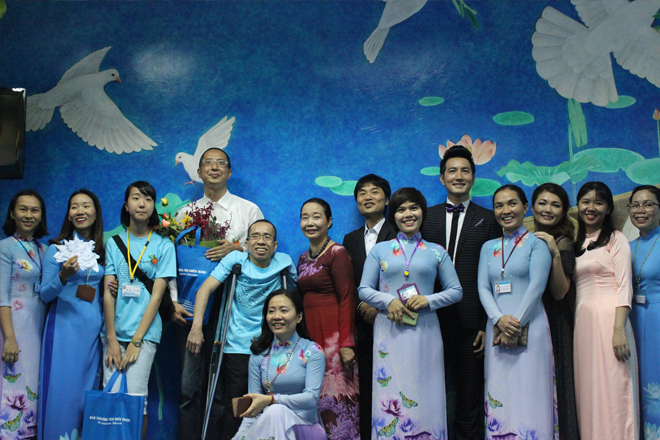 Wall painting of doves made under Japan-Vietnam project

TOKYO- A wall painting of flying white doves has been completed at a museum in Ho Chi Minh City by Japanese and Vietnamese painters, students and other people to express a wish for peace.

Participants in the painting project included Duc Nguyen, one of conjoined twins born in a region where the US military used defoliants during the Vietnam War.

In an address to a recent ceremony to unveil the wall painting of the War Remnants Museum, Duc Nguyen, 36, said it is meaningful that Vietnamese and Japanese people worked together in the project.

Duc Nguyen and his brother, Viet Nguyen, were separated in a 1988 surgery supported by the Japanese Red Cross. Viet Nguyen died in 2007.

Toshiaki Uchimoto, the assistant principal of a junior high school in Kawachinagano, Osaka Prefecture, western Japan, played a role of coordinator in the creation of the wall painting.

Uchimoto, 45, became acquainted with Duc Nguyen during his visit to Vietnam in 2009. They have since come up with the project to create a painting on a wall of the War Remnants Museum in Ho Chi Minh City.

Japanese and Vietnamese participants in the project spent about a month to complete the wall painting. Jiji Press