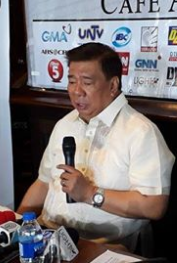 Three bills that the administration of President Rodrigo Duterte wants the Congress to pass might not happen this year or even for this Congress, a senior Senate official said in a forum on Wednesday. Senator Franklin Drilon, the Senate Minority Floor Leader, said 13 senators are against the reimposition of the death penalty while there is no committee report in the Upper House on postponing the barangay elections. He added while the House is discussing the tax reform bill, it will be deliberated in the Senate.. “These are very substantial and controversial pieces of legislation and I am not very optimistic that we could tackle them in the next four weeks substantially,” said Drilon. The House of Representatives voted to reimpose the death penalty. The Senate will resume deliberations on May 2. Drilon said the passage of this measure will be tough. “I do not see the death penalty bill as moving forward in the Senate,” said Drilon. “Right now it is stuck in the Committee on Justice.” “The death penalty is dead, at least in this Congress,” he added. Drilon said he sees 13 senators out of the 24 in the upper chamber “who will vote against the reinstatement of the death penalty.” “I do not see how it can pass for the next few five weeks, or for that matter during thjis Congress, unless a number of senators will change their minds,” said Drilon. Drilon said the 13 senators are “basically against the reimposition of the death penalty and whether or not it is limited to drug related cases or high crimes.” He said Senators Tito Sotto, Manny Pacquiao, JV Ejercito  Win Gatchalian and Cynthia Villar favor the death “ based on their media statements,  among others because its application is limited to drug related cases. .Drilon said if the barangay elections are postpone, how can one measure if an official did his job? “The best way to judge the performance of an elected public official is through an election, especially in the barangay where the electorate would intimately know the performance of their local officials,” he said. “The smallest unit in our system of government is the barangay. You know if the barangay captain or watchman are involved in drugs, so you will now vote for them. To me the cleansing process is the election.,” he said. DMS