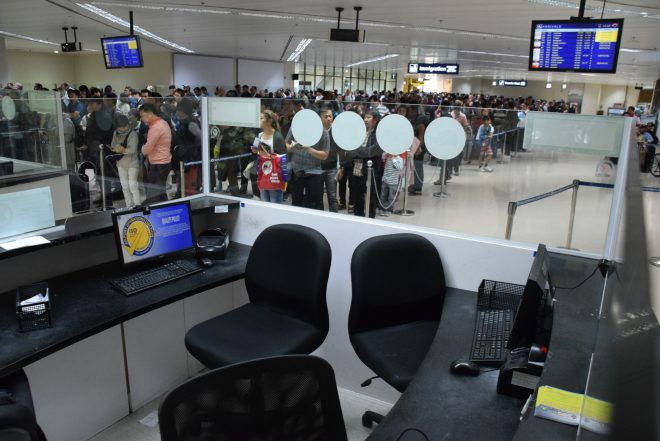 Justice Secretary Vitaliano Aguirre II on Monday said 32 immigration personnel have resigned, while 50 have filed leaves of absence for six months to look for another job as the budget law stopped payment of overtime. The budget law halted using express lane charges collected by the Bureau of Immigration, which covered salaries of casual and contractual personnel, confidential agents and job employees, augmentation of salaries of personnel who render services beyond office hours, and payment of health insurance premium. Funds from using express lanes are remitted to the national treasury. Lack of immigration bureau personnel has resulted in long lines at the counters in the airports. “This will also affect our economy in general that’s why we need to find an immediate solution,” Aguirre said. Aguirre said although the Department of Budget and Management set aside P200 million for extra work by immigration officers, a maximum of P5,000 in overtime pay of each immigration personnel can be paid. Before, Aguirre said those manning the immigration lanes were getting as much as P48,000 a month in overtime pay. Aguirre said with the help of Secretary Leoncio Evasco Jr., of the Office of the Cabinet Secretary, he is pushing for ways to address this problem. Aguirre said he and Evasco would be appealing to President Rodrigo Duterte to restore the old set-up for the express lanes until a new immigration law is approved. Aguirre said he tried to convince Budget Secretary Ben Diokno to approve a temporary arrangement, but Diokno refused. Aguirre said he issued a legal opinion funds may come from airlines and shipping firms under  Sec. 7-A of the Philippine Immigration Act. The provision states “Immigration employees may be assigned by the Commissioner of Immigration to do overtime work at rates fixed by him when the service rendered is to be paid for by shipping companies and airlines or other persons served.” Aguirre said the budget department expressed legal reservation over this. DMS