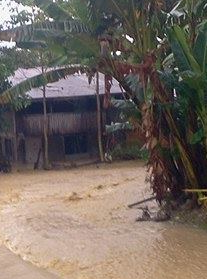 Nine people died in Cebu after rains and heavy flooding hit the province due to Tropical Depression Crising, the Office of Civil Defense said on Sunday.
In a report, the Office of Civil Defense Region VII identified the fatalities as Virginia Manulat, 70 and was found floating dead at Barangay Cambanay in Danao City; Nicolas Pongautan, 75, who was electrocuted in Brgy. Puente, Carmen; and Zovila Gica, 46, who drowned in Brgy. Triomfo, also in Carmen.
Meanwhile, Vience Ian Laping, Arcenia Laping, Rowena Sencio, Jade Sencio, and Ivan Sencio were all carried away by flash floods. It was not yet sure if they were sleeping during the time of the incident. Yanena Cando, 6, was found dead in Brgy. Cogon, West in Carmen.
Ten people were also injured after a stage collapsed while they were waiting for the Sugat Kabanhawan - a religious festival in the Municipality of Minglanilla, Cebu.
A total of 1,279 individuals were displaced in different evacuation areas in Consolacion, Mandaue City and Danao City.
At least 83 houses were totally damaged, while 91 others were partially damaged.
National Disaster Risk Reduction Management Council spokesperson Romina Marasigan said they have provided temporary shelter materials to those who were affected by the flood.
Marasigan also advised the public, especially those who live in flood prone areas, "to be informed and alert at all times."
Tropical Depression Crising weakened into a low pressure area after making a landfall in Hernani, Eastern Samar Saturday evening. (Ella Dionisio/DMS)