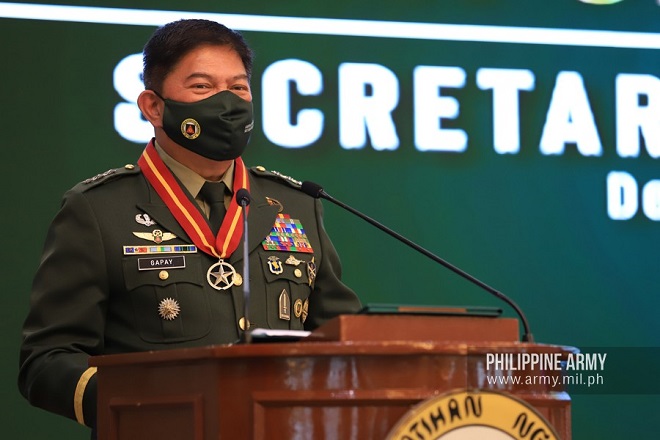 The Armed Forces of the Philippines (AFP) is eyeing a partnership with Japan on improving its cyber defense and security.

"We look at Japan as one of the sources of these modern equipment because Japan is technologically advanced as far as radars, military hardware are concerned," Gapay said in a virtual forum on Tuesday, referring to the Japan and Philippines radar system deal that was finalized last August.

"And aside from radars, we are also looking at Japan as a source of you know  developing our capabilities in cyber. This is one aspect we are focusing on now and I think we can partner with Japan in this area, cyber defense and security which is also one of their thrusts of the Japan Self Defense Force," he added.

Gapay noted that a number of the radar systems from Japan will be installed to monitor the territorial waters in West Philippine Sea.

"We are getting some radar equipment from Japan. This is part of our maritime domain awareness program  to really monitor what's going on not only in the West Philippine Sea but... in our territory. And part of this actually, a number of these radars will be installed in West Philippine Sea, specifically in Matinloc platform," he said.

"We have acquired the Matinloc  platform to be assigned one of the radars coming from Japan to beef up our monitoring capability in West Philippine Sea," he added.

"We are looking to Japan in beefing up our unmanned aerial systems capability. You know, drones and unmanned aerial vehicles to beef up our monitoring and maritime domain awareness as well," he said.

Gapay said the  Philippines is looking at Japan as ''one of the sources of modern equipment as part of our modernization program.

'' Japan has always emerged as among the shortlisted countries based on the studies of the different technical working groups," he added. Robina Asido/DMS