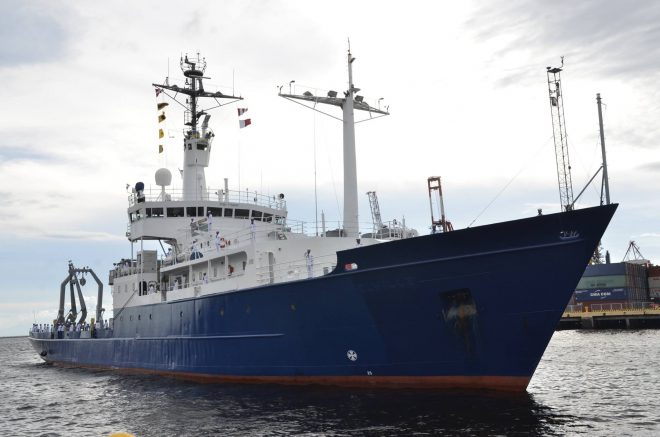 The Armed Forces of the Philippines (AFP) will send BRP Velasquez, the Philippine Navy’s Auxiliary General Research (AGR) 702 vessel if the government ordered them to survey the Benham Rise. “We have one survey vessel, our BRP Velesquez. I think it is operational and the members of the expedition team that once conducted the study conducted in Benham Rise acknowledges that the Navy has the capability, especially that ship, to do maritime research,”  Col. Edgard Arevalo, AFP Public Affairs Chief told reporters in Camp Aguinaldo. Arevalo said BRP Velasquez is the only Philippine Navy ship capable of conducting oceanagraphic and hydrographic survey. “That ship has capability and has mandate or capacity to be deployed for that purpose,” Arevalo added. Arevalo emphasized as of the present the AFP has not received instruction from the Department of National Defense and the Office of the President to conduct patrols in Benham Rise. “We have not received instructions from the DND and the Office of the President for us to conduct patrols. What we are saying is your AFP is ready to undertake its mandate to defend our Constitution, to defend our territories and our sovereignty but we would of course defer to this decision of our political leadership,” he said. The BRP Gregorio Velasquez, which formerly the R/V Melville,  was one of the two ex-American ships pledged by President Barack Obama when he visited the Philippines during the APEC Leaders Summit in November 2015. The other US ship pledged by Obama was the BRP Andres Bonifacio (FF-17), formerly named as USCGC Boutwell. AGR-702 arrived in June 2016 after it was commissioned last April of the same year. Robina Asido/DMS