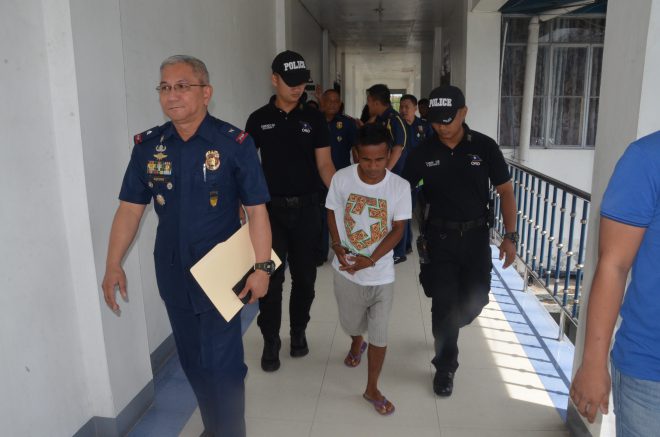 Justice Secretary Vitaliano Aguirre II on Thursday assured the widower that justice will be served in the massacre of his five family members last week in Bulacan. Aguirre made this comment even as news reports said the main suspect pointed out that he was tortured into confessing that he was behind the crime and two persons of interest were found dead. Aguirre met Dexter Carlos, the security guard whose wife, mother-in-law, and three children were killed inside their house at North Ridge Royal Subdivision in Barangay Sto. Cristo. "Losing one’s family to criminals is a very hard experience for anyone, we should help him get the justice he deserves... The Department of Justice is more than willing to extend any assistance that he may need in getting justice for what was done to his family," Aguirre said. Carlos was given legal assistance by the Public Attorney's Office and was placed under the witness protection program. Upon Aguirre's offer, Carlos applied for WPP protection and was placed under provisional coverage. In Camp Crame, the spokesman of the Philippine National Police said Bulacan will have to answer to allegations from Carmelino Ibanes, the suspect, he was tortured into saying he was behind the crime. “( The) Bulacan Provincial Police (must) answer these allegations because it’s an incident that happened in their jurisdiction,” said Chief Superintendent Dionardo Carlos. Carlos said if there is an allegation that Ibanes is the fall guy and the Central Luzon police regional office and Camp Crame need to answer this, it will do. Earlier this week, Aguirre ordered the National Bureau of Investigation (NBI) to conduct a parallel probe on the massacre. Ibañes was arrested a day after the June 27 killing. He confessed to killing all five victims using knife from the house and raping the mother and daughter while he was drunk and high on shabu. Investigators said Ibañes was drinking with two friends identified only as alias Tony and alias Inggo before the incident.But Ibanes nested negative for drug use. Two suspects tagged by Ibañes - Rolando Pacinos alias "Inggo" and Rosevelth Sorima - were reported killed. DMS