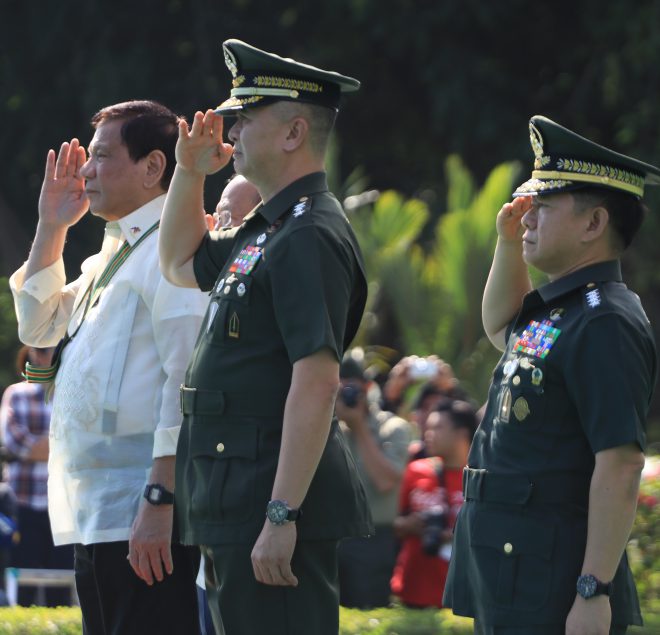 The Philippine Army welcomes the decision of President Rodrigo Duterte to create better housing facilities for soldiers to replace homes occupied by an militant urban poor group in Bulacan since last month. “We are also happy and excited to hear his plans to give our troops better housing facilities,” Col. Benjamin Hao, Philippine Army spokesman said, reacting to Duterte’s pronouncement during the Army’s 120th anniversary celebration in Taguig City. Tuesday. “We will adhere to the President's appeal. We will talk to our troops and explain to them the position of our President,” Hao added. Duterte said he will try to finish the housing project by December. The members of Kadamay occupied more than 5,000 vacant housing units in Pandi, Bulacan last March 8. The Army’s 120 th anniversary celebration was attended by defense and military officer including Defense Secretary Delfin Lorenzana, AFP Chief of Staff Gen. Eduardo Año, Army Chief Lt. Gen. Glorioso Miranda and others. Miranda gave a set of military uniform and a canteen cup to Duterte symbolizing their gratitude to his effort to promote wellness of Filipino soldiers. “We thank you for always visiting our camps to know our conditions, our hospitals to check on our wounded soldiers and to the rural areas to sympathized to the families of our personnel who risk their lives for the people,” he said. “This thing proves your concern to our soldiers that motivates them to work harder and to protect the freedom and our people,” Miranda added. In his speech, Miranda lauded efforts and sacrifices of every soldier to accomplish their mission. “As we celebrate 120 years of service, we salute all soldiers who have given the ultimate sacrifice in the accomplishment of our mission to defend this country from hostile forces both foreign and domestic,” he said. “The sterling courage, unrivalled heroism, and dedication to peace and freedom of our departed comrades are part of the army’s grand tradition.  They embody the greatest ideals by which all the men and women of the Philippine Army always aspire for in their own service,” he added. (Robina Asido/DMS)