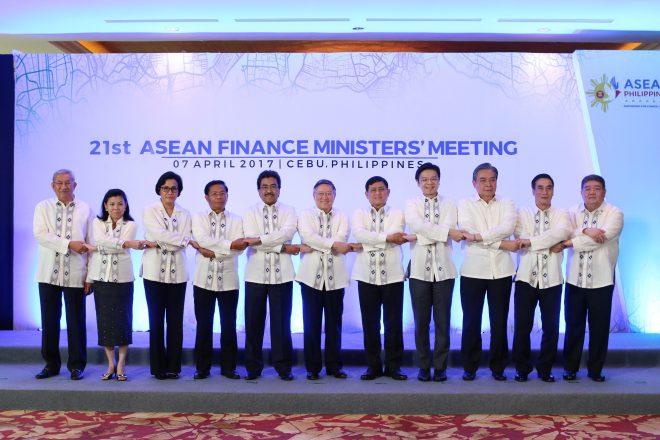 LAPU-LAPU CITY—The finance ministers and central bank governors of the Association of Southeast Asian Nations (ASEAN) reaffirmed Friday their commitment to promote economic growth and strengthen  financial integration and  stability in the region to guard against risks in the global economy arising from possible  protectionist policies and volatilities, while  ensuring that economic benefits are shared equitably among its peoples. In a joint statement issued at the end of the third ASEAN Finance Ministers and Central Bank Governors Meeting,  they also committed to “remain steadfast” in pursuing ASEAN’s goals to achieve a highly integrated, cohesive economy” that is “competitive, innovative, dynamic, with enhanced connectivity and sectoral cooperation” as well as “resilient, inclusive, people-oriented, people-centered and connected with the rest of the world” amid the rise of protectionism and geopolitical developments that could derail the recovery of the global economy. “As such, we shall continue to promote economic growth, financial integration, strengthen financial stability, implement appropriate monetary, fiscal and macroprudential policies in our jurisdictions, and intensify financial cooperation to further advance our region’s resilience,” the joint statement issued Friday night read. The finance and central bank chiefs also pledged to deepen regional financial cooperation to realize an ASEAN Economic Community 2025,  pursue the creation of an interconnected, inclusive and resilient regional capital market and ensure the efficient development of the Green Bond initiatives. They also initiated a “financial inclusion initiative” to deliver more financial products and services to under-served communities within the ASEAN and reaffirmed their vision of liberalizing  progressive financial services. The  meeting was held  following separate meetings  in the morning of the finance ministers hosted by Philippine Finance Secretary Carlos Dominguez III, and the central bank governors, which was  hosted by Bangko Sentral ng Pilipinas (BSP) Amando Tetangco Jr.. The finance and central bank chiefs also noted  the  sustained expansion of the ASEAN economy at 4.6 percent in 2016 amid global uncertainties, and stressed that domestic demand will continue to be a key driver to regional growth, while structural reforms, public spending and fiscal stimulus will enhance investments in the region. But they also  cited  “risks” emerging from  a rising tendency toward protectionism, normalization of policy rates, and “geopolitical developments, which could derail the recovery of the global economy.” “We urged international financial institutions to be vigilant as guardians of the open multilateral system. The normalization of policy rates may also increase volatilities in our economies. Despite this, we remain committed to promoting closer trade and investment ties between our economies. We recognized the need to ensure that the benefits of growth are shared equitably among our people.” the statement read. The finance and central bank heads also discussed promoting the use of local currency to facilitate intra-ASEAN trade and investments and  the ASEAN payment and settlement systems. “In this regard, we welcomed the signing of agreements among Indonesia, Malaysia, and Thailand on the settlement of trade in domestic currencies,” the joint statement read. DMS