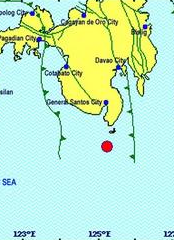 A 7.2 magnitude earthquake struck Davao Occidental resulting in at least three injuries and severely damaging the sea port in Glan town, Saranggani province on Saturday morning. Rene Punzalan of Provincial  Disaster Risk Reduction and Management Office in Saranggani said three people obtained minor injuries, including nine-month pregnant Everly Dala,16,  Edilberto Corporal, 55 and Leodulfo Remullo 56. According to Punzalan, the situation is returning back to normal except in Glan which is totally damaged according to their report. He said the damage in the sea port may affect trade with the neighboring countries, like Indonesia. “The purpose is to have an alternative port that can connect us with our neighboring countries in Southeast Asia and the province of Davao Occidental” he added in an interview with dzBB. Bong Dacera, chief of the General Santos City Disaster Risk Reduction and Management Office, said there were slight damages in infrastructure. He said the city experienced 15 minor aftershocks. “After the tsunami alert was lifted the residents who evacuated after the ground shock returned to their houses” he added. Dacera told radio station dzBB government business can continue, and our utilities and power does not have any interruption”. (Alanna Ambi/DMS)