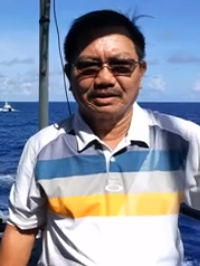 Agriculture Secretary Emmanuel Piñol said after a historic three-day exploratory trip to 13-million hectare underwater plateau Benham Rise the area is a key to securing food security. In a statement Monday, Piñol said he will report to President Rodrigo Duterte in today’s Cabinet meeting that Benham Rise is a rich fishing ground that should be protected and secured from over-fishing and over-exploitation. He said he will recommend to Duterte the Cabinet the construction of a facility in Benham Bank, the shallowest portion of Benham Rise, to house a research center for marine scientists, a dock for the local fisherfolk, an ice-making plant to keep fish catch fresh, a station for the Coast Guard, and a weather radar station. Piñol, with a team from the Department of Agriculture and the Bureau of Aquatic and Natural Resources (BFAR), explored Benham Rise on May 5-7 to conduct research on how to harness the full potential of Benham Rise. Three technical divers explored the shallowest part of the Benham Bank which is around 35 meters to study the sea floor and check for the possibility of establishing a research center in the area. The agriculture secretary presided over the floatation of 15 payaos or fish aggregating device , the initial batch from a total of 30 payaos to be floated by BFAR in the region designed to attract fish to congregate for easier fishing. "This is a pro-active action to discover how rich Benham Rise is as far as natural resources are concerned. More importantly,  this is also to protect the area from overfishing and to give our fisherfolk priority access to Benham Rise's marine resources and make them partners in ensuring the protection of Benham Rise,” Piñol said. Benham Rise is a 13-million hectare underwater plateau that is around 5,000 meters deep from the sea surface and accounts for 43 percent of the total fish catch landed at Dinahican Port in Infanta, Quezon. To prove the government’ seriousness in dealing with illegal fishing in the region, he announced that the agriculture department will propose to the budget department to buy  helicopters and 20 unmanned drones to aid in patrolling the Philippine coastal areas. "The Philippines is losing $30 billion yearly due to illegal fishing; that is why we are reinforcing our efforts against illegal fishing while exploring new fishing grounds for our people" Piñol said. DMS