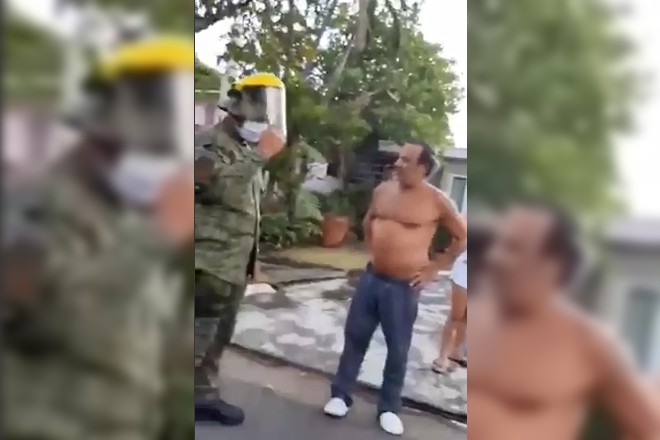 The Bureau of Immigration (BI) has charged Javier Salvador Parra for undesirability and being an overstaying alien.

BI Commissioner Jaime Morente confirmed Friday that a deportation charge has been filed against Salvador Parra, whose viral video made rounds on social media earlier this month after he resisted arres  by Makati police for allegedly violating Enhanced Community Quarantine (ECQ) policies.

“Upon investigation by our intelligence division, it was confirmed that he has failed to extend and has already overstayed his visa,” Morente said.

Parra’s househelp was reportedly accosted for not wearing a facemask while watering plants outside the house.

She then went inside the house, after which  Parra came out to confront the authorities and uttered expletives to the police.

“Foreign nationals who are here in the country are expected to follow Philippine laws, especially in these special times wherein public health and safety is at risk,” said Morente.  “There is no exemption, whether you are living in a posh village, or in a slum area, you must obey the law,” he added.

According to the BI, foreign nationals who disregard laws and disrespect persons of authority may be considered undesirable aliens.

“Aliens who disrespect symbols of our country and persons of authority are not welcome in the Philippines.  Their sojourn here is a privilege, not a right.  It is in the same manner that our kababayan who are living and working abroad respect the laws of their host country,” Morente stated.

BI legal officers added that Parra was ordered to submit a counter-affidavit to answer the reports against him, but he reportedly refused to receive the notice and disregarded the requirement, which was due last May 21.

“Our offices remained open to receive his response, but he failed to submit any,” said Morente.  He added that they are intent on pursuing the case to serve as a warning for aliens disregarding the law.

Morente stated that the deportation case is a separate action from criminal cases that have been filed by the police against the Spanish national. DMS