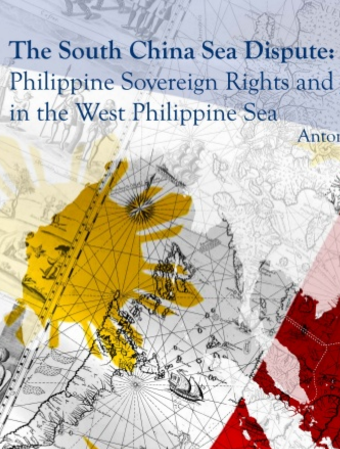 Supreme Court Senior Associate Justice Antonio Carpio will soon release a Mandarin version of his new e-book that would belie China's "historic" claim over almost the entire South China Sea. Carpio, who launched on Thursday his book, "Philippine Sovereign Rights and Jurisdiction in the West Philippine Sea," said his plan of releasing its Mandarin version aims to convince the Chinese people that their government's claim over the resource-rich waters, through the nine-dash line, has no legal basis as ruled in July last year by The Hague-based Permanent Court of Arbitration. “This e-book is intended to convince the Chinese people, that the nine-dash line has no legal or historical basis,” said Carpio, referring to China’s nine-dash line map - a tongue-shaped enclosure that encompasses almost the entire South China Sea. “That is why a Mandarin version of this book will be released hopefully before the end of the year,” added by the magistrate, who assisted the Philippine legal team in pursuing its case before the arbitral tribunal. While he plans to release a Mandarin-version of his e-book, Carpio acknowledged that the book in its printed form could never be distributed in China. “It will be banned,” he said. But he expressed hope the book’s electronic version, through multiple download sources, would be able to reach the Chinese people. Carpio's book aims to educate Filipinos of the Philippines’ maritime entitlements in the South China Sea and the vast resources within it that belongs to them and the future generation as affirmed by PCA. It contains a compilation of interactive maps, including one dated 1734, which was submitted by the Philippine government to the arbitral tribunal when it filed a case against China in 2013 under the administration of former President Benigno Aquino III. The map was used as evidence to prove Manila’s claim over parts of the South China Sea, locally known as the West Philippine Sea. DMS