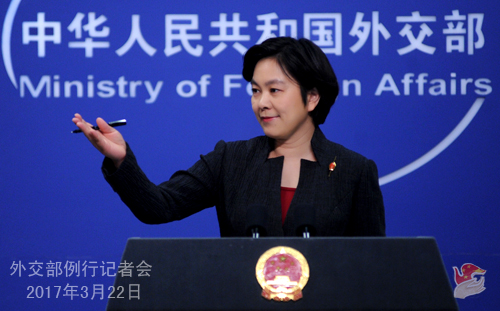 China denies a reported plan to build an environmental monitoring station in Scarborough Shoal, the official Xinhua News Agency said Wednesday in Beijing. “The reported plan to build an environmental monitoring station on Huangyan Island in the South China Sea is not true”, Foreign Ministry spokesperson Hua Chunying a foreign ministry spokesperson said Wednesday in Beijing. Hua made the remarks at a daily press briefing, Xinhua said. "Our position on Huangyan Island has been consistent and clear," she said. She added that China attaches high importance to its relationship with the Philippines, values the current good development momentum and will continue to promote bilateral ties, Xinhua reported. Huangyan is the Chinese name for Scarborough Shoal which is also known as Panatag Shoal by the Philippines. China had said it holds undisputed sovereignty over Huangyan Island. Earlier, the Philippines has formally asked China to clarify reported plan that it will construct structures in the Scarborough Shoal, the Department of Foreign Affairs (DFA) said. In a televised press conference from Thailand, Acting Foreign Affairs Secretary Enrique Manalo said: "The other day, the Department of Foreign Affairs already issued, requested China for clarification on this reported plan. But let me also say in the meantime the Philippines is maintaining a close watch." Asked if the DFA has any plan of filing a strong protest as what Justice Secretary Vitaliano Aguirre II said Tuesday, Manalo replied," We already approached China to seek clarification on this reported plan. We have to wait for reply." There were reports Sansha City, which China created to strengthen its claim over the entire South China Sea, was planning to build an environmental monitoring station on Scarborough Shoal. The shoal is within the 200 nautical miles exclusive economic zone of the Philippines. Manalo said the Philippines, as well as the nine other member countries of the Association of Southeast Asian Nations, and China are set to hold senior officials' meeting on the Declaration of Code of Conduct in the South China Sea to discuss the framework, which will be the basis for the COC. (DMS/Celerina Monte)