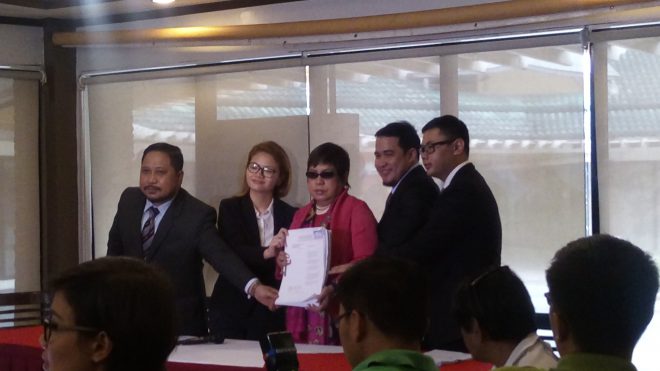 Citinickel Mines Development Corp. filed graft charges against Environment Secretary Gina Lopez before the Office of the Ombudsman on Wednesday. Citinickel, through lawyer Lorna Kapunan, filed charges of violating Section 3(a), (e) and (f) of the Anti-Graft and Corrupt Practices Act, Illegal Exaction, Violation of the Code of Conduct and Ethical Standards for Public Officials and Employees and Violation of the Red Tape Act 2007 against Lopez. The charges came before the Commission on Appointments rejected Lopez’s appointment as environment secretary. Kapunan said Citinickel sought a a mineral ore export permit to transport their stockpile that was mined. It  was granted by the Mines and Geosciences Bureau on November 2016. “We don’t understand why is she so keen on proceding (with) additional requirements and obstacles with Citinickel when Citinickel is among the few mining companies that are compliant by law” she said. According to Kapunan, Lopez issued a memorandum on January 30 that includes setting up a trust fund of two million pesos per hectare of disturbed land. She said on February 17, Lopez set another condition before a mineral ore export permit will be granted, This is to secure a  P130 million performance bond and use BioChar as a means of rehabilitating mined areas to make sure the watershed is healthy. BioChar is a company headed by Philip Camara, a former undersecretary of the environment department, Kapunan said. Lopez, through Camara, also demanded that aside from (P2 million per hectare of disturbed land and a P130 million performance bond, Citinickel should deposit an additional of P1 million per vessel used to ship the mineral ores to Espanola Community Administration Services Inc, Kapunan added. Funds from this later requirement was to finance a development program for Narra and Espanola areas in Palawan. Kapunan said Lopez should be held liable for illegal exaction for requiring Citinickel to set up a P130 million trust fund which has no legal basis. (Alanna Ambi/DMS)