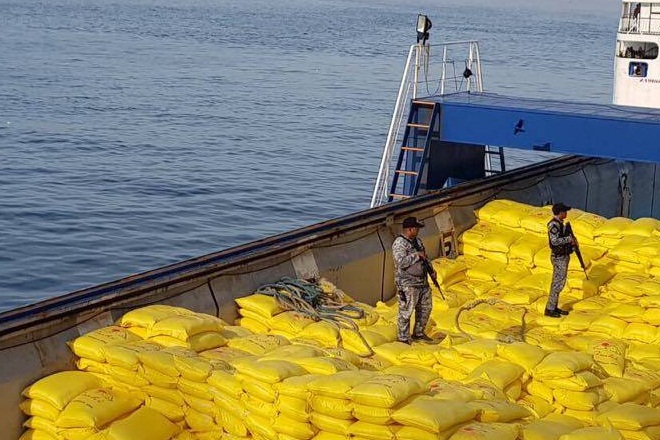 Joint elements of the Philippine Coast Guard (PCG) intercepted a cargo vessel loaded with approximate number of 60,000 undocumented sacks of rice with an estimated market value of P120 million at somewhere around 25 nautical miles Southwest off Olutanga, Zamboanga Sibuguay around 9:30am  Sunday.

The PCG is investigating MV J-Phia, a Liberian flagged cargo ship with 50,242 gross tonnage and overall length of 282 meters was found carrying thousand sacks of rice without pertinent documents onboard, the Department of Transportation said in a statement on Monday.

According to reports received from Coast Guard district in Southwestern Mindanao (SWM), joint units composed of Special Operations Unit, Coast Guard K9 Team onboard PCG vessels, DF-314 and its multi-role response vessel, BRP Tubbataha were alerted to apprehend the vessel after receiving information that it was transporting a cargo transferred from a foreign vessel somewhere in Sulu sea.

The vessel's captain claimed the vessel’s last port of call was Cagayan de Oro but it cannot show any records of departure. The PCG units in Cagayan De Oro also disclosed the vessel has no record of departure in their area of responsibility.

Subsequently, the PCG vessels escorted MV J-Phia to Zamboanga Port for proper disposition for as possible case of smuggling. The PCG and Bureau of Customs will initiate forfeiture proceedings of MV J-Phia and will file appropriate case for its crew members. DMS