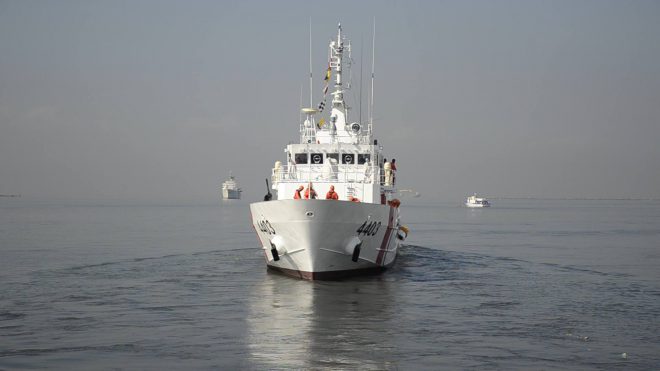 The Philippine Coast Guard deployed one of its Multi Role Response Vessel (MRRV) from Japan to patrol Benham Rise for the first time. Commander Armando Balilo, Coast Guard spokesman, said Thursday BRP Malapascua  left headquarters to conduct maritime security operation at the vicinity waters of Benham Rise last Wednesday. “The operation aims to monitor the Joint Fisheries Research activity in the waters,” Balilo said. In an interview with the Daily Manila Shimbun, Commander Gary Gimotea,  commanding officer of BRP Malapascua said they were at the Bicol area in the afternoon. He said their patrol may finish before May 10. “It depends. Maybe before (May) 10 we’re finished,” Gimoteo said, referring to their mission in Benham Rise. Gimotea said some government officials, including  Agriculture Secretary Emmanuel Pinol and  Undersecretary Eduardo Gongona of Bureau of Fisheries and Aquatic Resources (BFAR) are with them. Balilo said this is the first time one of their MRRVs from Japan were sent to patrol the Benham Rise,  a 13 million hectare underwater plateau located near Aurora province. “According to marine experts, the Benham Rise is about 2,000 to 5,000 meters deep and is rich with natural gas and other resources,” Balilo said. “In 2009, the Philippines claimed this feature as part of its continental shelf in a claim lodged with the United Nations Commission on the Limits of the Continental Shelf. This claim was then approved under the United Nations Convention on the Law of the Sea (UNCLOS) in 2012,” he added. It can be recalled that Defense Secretary Delfin Lorenzana has announced the government’s plan to conduct research and to increase maritime patrols over the area, after he revealed that they  monitored a Chinese survey ship in Benham Rise last year. Robina Asido/DMS