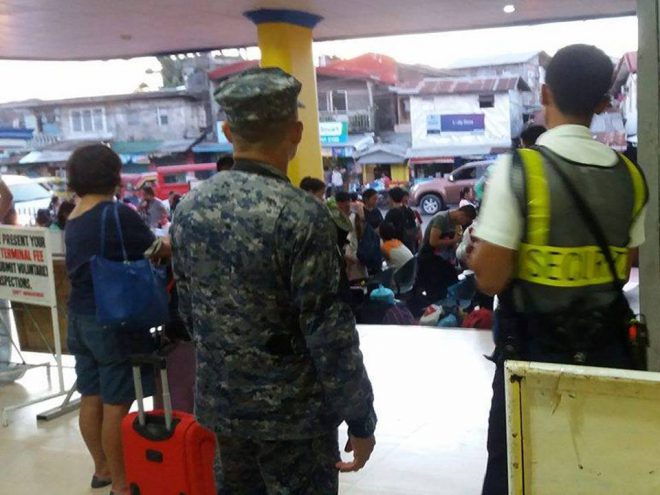 Thousands of passengers were stranded after the Philippine Atmospheric, Geophysical and Astronomical Services Administration (PAGASA) raised a public storm warning signal as Tropical Depression Crising ​made landfall over ​Eastern ​Samar on ​Saturday. As of 12 noon, the Philippine Coast Guard has recorded a total of 4,525 passengers, 35 vessels, 11 motor boats and 379 rolling cargoes in the ports of Central Visayas, Bicol, Eastern and Western Visayas. In a television interview, Commander Armand Balilo, Philippine Coast Guard spokesman said the suspension of trips in the affected areas was started around 7 pm last Friday. “These number would probably still increase as there are some more who would be traveling,” he said. “As a matter of procedure we should lift the suspension once PAGASA lifts the warning signal over the area. However, we give some discretion to the station commander if the current situation would not be safe for travelers,” he added. As of 4pm Tropical Depression Crising was last spotted at 50 km east-southeast of Borongan City, Eastern Samar with maximum sustained winds of up to 45 kph and gustiness of up to 62 kph while moving west northwest at the speed of 17 kph and central pressure of 1,00​4​ hectopascals. The state weather bureau placed the areas of Northern Cebu, Northern Samar, Eastern Samar, Samar, Biliran, Leyte under signal number one. ​Crising ​made landfall over​ the area of​ Hernani, Eastern Samar a​round 6:30 pm, PAGASA said. ​Aurelio ​said based on Saturday's forecast; Crising is expected to weaken into a low pressure area before leaving the Philippine area of responsibility on the side of the West Philippine Sea. In its weather bulletin, PAGASA warned that moderate to occasionally heavy rainfall may be experienced within the 150 km diameter of the tropical depression. The state weather bureau warned areas under signal number one for possible landslides and flashfloods. Based on its forecast position, Crising is expected to be at 15km northwest of Roxas City, Capiz by Sunday morning. (Robina Asido/DMS)