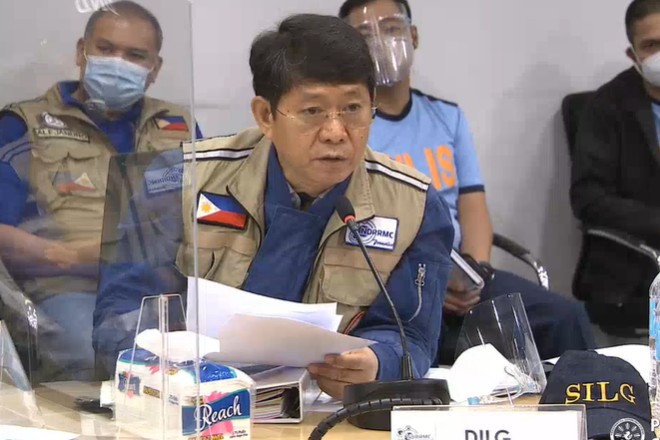 Interior Secretary Eduardo Año appealed to the public to follow the local government units and evacuate if needed due to Typhoon "Rolly."

“We will conduct forced evacuation because we cannot just ask them because the life of the people is important here, that's why don’t refuse if you are asked to evacuate,” Año said in a televised briefing at the National Disaster Risk Reduction and Management Council headquarters.

“We need to ensure the safety of everyone,” he added.

The secretary made the statement after reports that some residents in areas affected by the typhoon refused to evacuate.

Año said the government is very well-prepared for the typhoon.

“We prepared for this typhoon that’s why we are hoping for few casualties,” he said.

He also assured the public that LGUs were informed about observing minimum health standards inside the evacuation centers.

“It’s included in our advisories that LGUs must assure that evacuation, isolation (areas) are safe and minimum health standards are being followed… During this time of typhoon, we should still address the pandemic,” Año said.

“We are also asking the public to share their information if they need help so that the police can easily respond,” Cascolan said.

He said the PNP is ready for search and rescue operations.

“There will also be forced evacuation if the police personnel will see that you are already in danger,” he added.

According to NDRRMC, a total of 96,543 families or 346,993 individuals, from Central Luzon, Bicol Region, Eastern Visayas, National Capital Region (NCR), Calabarzon, and Cordillera Administrative Region (CAR), were already evacuated by the typhoon.

As of 11am, Super Typhoon “Rolly” weakened into a typhoon and is now off the coast of Pasacao, Camarines Sur. Ella Dionisio/DMS