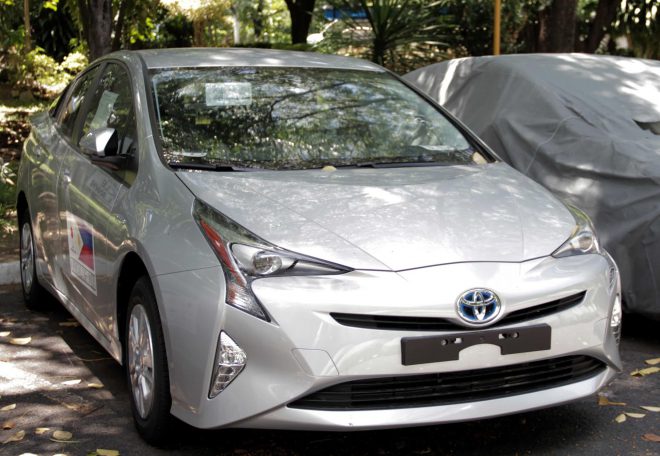 The Department of Energy (DOE) is giving 24 2017 Toyota Prius cars to government offices, led by the Office of the President as part of its campaign to promote energy efficiency and clean air. At 10 am, May 19 at the energy department’s Sunken Garden, the department will donate the cars to the Office of the President, Department of the Interior and Local Government, Department of Finance, Department of Foreign Affairs, Department of Budget and Management, Department of Transportation (DOTr), Department of Tourism, Department of Trade and Industries (DTI), Department of Environment and Natural Resources (DENR), National Economic Development Authority, Department of Science and Technology (DOST), and the Philippine National Police, the DOE said in a statement. Eight hybrid cars will  be given to government offices in Region 8 including the Department of Environment and Natural Resources, Department of Trade and Industry, Department of Science and Technology, Bureau of Fire Protection, Philippine Information Agency, Department of Transportation-Land Transportation Office, and the Regional Disaster Risk Reduction and Management Council in support to the economic and social recovery of communities devastated by super typhoon Yolanda “This Japan government-aided grant will jumpstart our drive towards our call to action to our fellow public servants to increase their use or patronize energy efficient technologies, including their official vehicles. We have to be the role model in this cause, so our people can look up to us and follow our lead,” said Energy Secretary Alfonso Cusi. Officials of the energy department’s Energy Utilization Management Bureau and Japan’s Ambassador to the Philippines, Kazuhide Ishikawa, will turn over the hybrid Toyotas to the beneficiaries. Japan's Non-Project Grant Aid (NPGA) funded the acquisition of the Toyota Prius, which emits lower carbon emission. The hybrid car has an optimized fuel engine and electric motor to attain highest energy efficiency. DMS