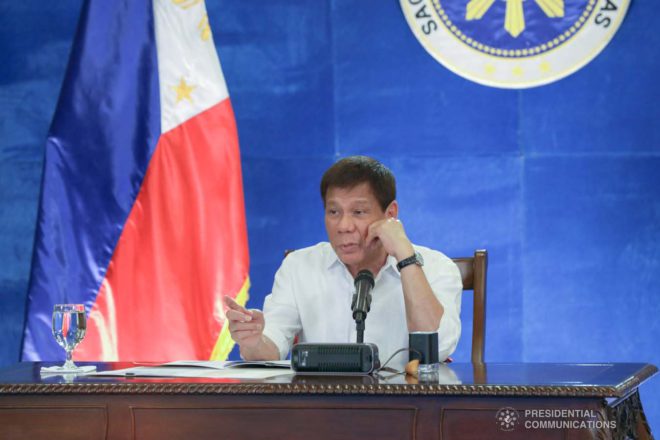 Duterte hopes people to properly wear face mask, not just on edge of the nose

President Rodridgo Duterte has expressed hope that people would "religiously obey" the health protocols, including the proper wearing of face masks, which he could see were just hanging near the nose of some individuals.

In his televised public message on Monday night, Duterte said the country would be in "serious trouble" if from currently over 500,000 recorded COVID-19 cases, it would reach millions.

"So, we continue to pray...those infected already reached to more than 500,000. I hope it would not reach millions because then we would be in serious trouble. We would be no better than the other countries whose rise are really exponential," he said.

"The problem here is how you, may be, obey the protocols of washing (hands) then (wearing) mask," Duterte said.

While the wearing of face mask could not 100 percent give protection, but it could help reduce COVID-19 transmission, he said.

"I'm just a layman on these things because I am not a doctor, I'm not a medical person - it (wearing of face mask) will give you something like 80 percent (protection) for as long as you wear it properly. Because while others are wearing mask, I can still see their nose just on the edge of the mask, the upper portion. So, it does not really give a relief at all," he explained.

"I hope that you would be religious in obeying the injunctions that our medical persons have been saying simply because we are trying to save our economy," the President added.

Duterte said when he could see people dying on the streets due to coronavirus, "maybe I could use the draconian measures of telling eveybody to stay put inside their houses."

However, he acknowledged that the problem is how to sustain it.

While the government could surmount providing food for the people, but he said, "it would also, at the same time, kill the economy because nobody's working. Again, we'd go back to the non-productivity of the economy. No one is working, no output, no one is paying, no one is selling, and all."