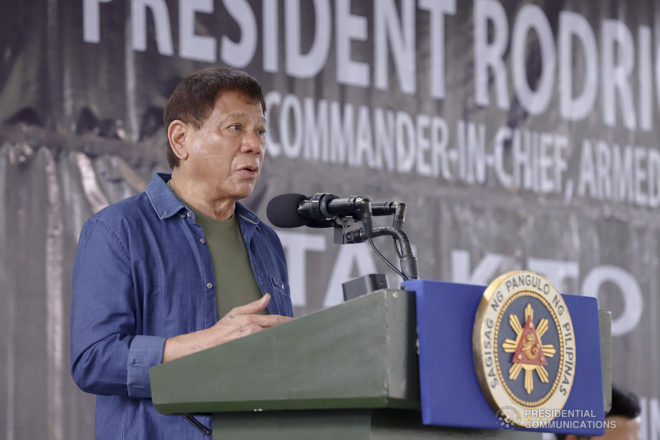 President Rodrigo Duterte said on Monday that the Filipino people owe a debt of gratitude to the 44 slain police commandos and their families and loved ones.

Duterte issued the statement as he led the country in honoring the memory of the 44 troops of the Philippine National Police-Special Action Force who "offered their lives" in defending the nation six years ago in Mamasapano, Maguindanao.

"To their families and loved ones left behind by the 44 brave SAF personnel who perished on January 25, 2015, please know that we owe you a debt of gratitude that cannot be repaid, and that you have the love and respect of a grateful nation," he said.

He said the Mamasapano incident was an "enduring testament to the unyielding commitment" of the uniformed personnel to fight all threats to the national security.

"This heartbreaking incident serves as a painful yet necessary reminder to all of us that the struggle for lasting peace comes with a very heavy price," Duterte said.

"Let us all remember that we have not just lost valiant police officers who made the ultimate sacrifice defending our nation. On that day, there were also some of us who lost their husbands, fathers, sons, brothers, friends, and colleagues whose members will forever be in their hearts," he added.

The 44 police commandos perished when they encountered some lawless elements, including members of the Moro Islamic Liberation Front, while withdrawing from an anti-terrorist operation in Tukanalipao in Mamasapano on Jan. 25, 2015.