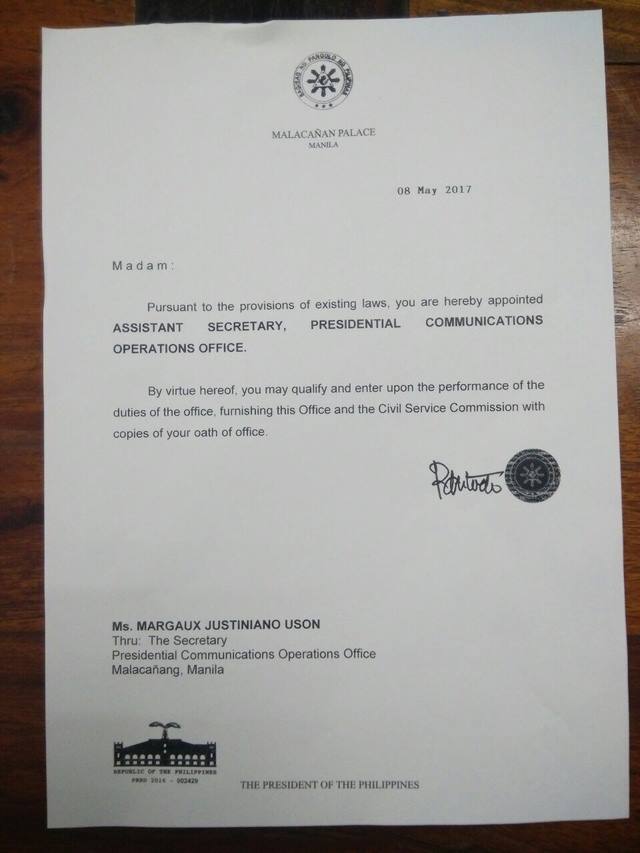 President Rodrigo Duterte has appointed blogger Margaux Justiniano Uson, also known by her nickname Mocha, as assistant secretary of the Presidential Communications Operations Office (PCOO). Duterte signed Uson's appointment on May 8. Malacanang said Uson, a former sexy dancer-singer, will be assistant secretary for social media. With her appointment, Uson will no longer be a member of the Movie and Television Review and Classification Board. Uson's designation as member of MTRCB "is deemed relinquished due to her new post as assistant secretary," said Executive Secretary Salvador Medialdea. Uson is a known supporter and defender of Duterte even when he was still campaigning for the presidency. She is fond of attacking the mainstream media in her blogs when there are criticisms against the president. Duterte also appointed 64 other people, including former House Speaker Jose de Venecia Jr., to various government posts. De Venecia was named as special envoy for intercultural dialogue, according to acting Foreign Affairs spokesman Robespierre Bolivar. (Celerina Monte/DMS)