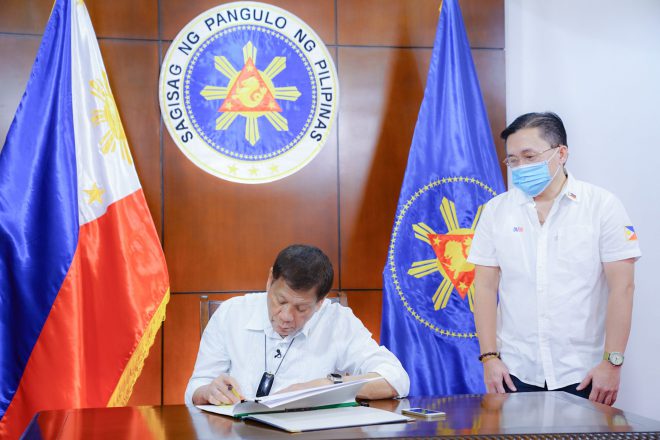 President Rodrigo Duterte has signed into law a bill establishing the National Academy of Sports, Malacañang said on Wednesday.

Duterte approved Republic Act No. 11470 on June 9 in Davao City.

RA No. 11470 seeks to establish the NAS in New Clark City, Capas, Tarlac, which is mandated to implement a quality and enhanced secondary education program, integrated with a special curriculum on sports.

"We consider this a good follow-through to our country’s hosting of the 2019 Southeast Asian Games, where the Philippines emerged as the over-all leader in the medal tally," Presidential Spokesperson Harry Roque said in a statement.

The Palace lauded the lawmakers from both Houses of Congress for making sure that the bill would be passed into law.

The creation of NAS was one of the priority legislative measures mentioned by the President in last year’s State of the Nation Address as recommended by Senator Christopher Lawrence “Bong” Go, Chair of the Senate Committee on Sports, and one of the principal authors of RA No. 11470, Roque said.

"The Philippines has demonstrated that we can be on par with our neighbors in the region in terms of sports. With PRRD’s signing of RA 11470, we are confident that we will be able to raise our student-athletes’ competitiveness in the field of sports and produce world-class athletes in the years to come," he said. Celerina Monte/DMS