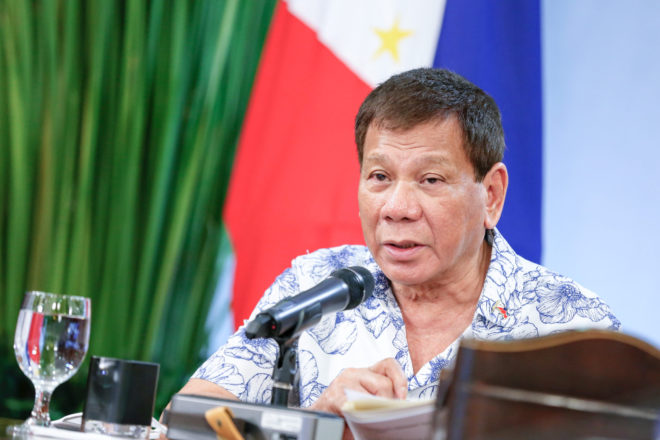 Duterte says he’ll be last to get COVID-19 vaccination; wants to give way first to vulnerable, poor sectors

President Rodrigo Duterte said on Wednesday night that he, along with other government officials, would be the last to receive the vaccine against coronavirus disease as he wants other Filipinos, especially the vulnerable sector and the poor, to be inoculated first.

In his weekly "Talk to the People," Duterte said that the prioritization for COVID-19 vaccine will be based on geographical and setoral considerations.

"I said before, the first one (to get the vaccine) are the poor, those who don't have the money...the frontline health workers," he said.

The teachers, social workers, and those working in agriculture, food, tourism, as well as the overseas Filipino workers would also be among those to be vaccinated first, he said.

Duterte said the uniformed personnel are on the "fifth priority."

"We're on the last. If there will be left (vaccines) for us, for (Senator Christopher) Bong (Go), (Defense) Secretary (Delfin) Lorenzana...let them (vulnerable, poor) be the priority," he said.

As much as possible, the President said he wants all the over 110 million Filipinos be inoculated against COVID-19.

"There is no discrimination here," he added.

In some other countries their leaders, such as President Joko Widodo of Indonesia, have led the massive vaccination drive to encourage their citizens to do the same.

A latest survey in the Philippines showed that many Filipinos were hesitant to have themselves vaccinated due to concern on the safety and efficacy of the vaccines. Celerina Monte/DMS