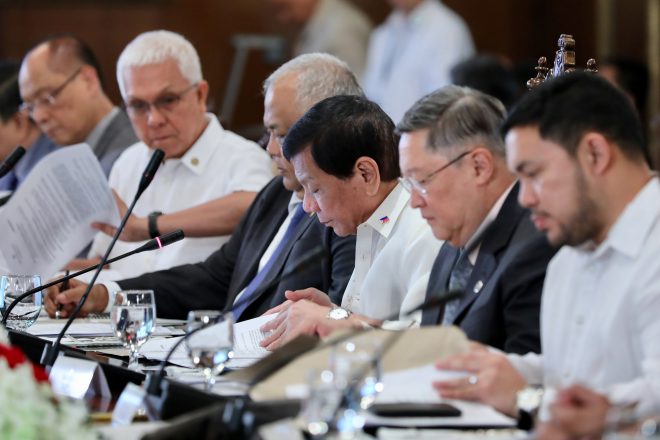 Duterte set to submit to Congress proposed P3.767 trillion budget for 2018 during SONA

President Rodrigo Duterte has approved the proposed P3.767 trillion budget for next year with the target of submitting it to Congress for its approval during his second State of the Nation Address on July 24, Budget Secretary Benjamin Diokno said on Tuesday. "Yes, he did. I'm finalizing it now so he can submit the President's Budget on the day of his SONA, July 24th," Diokno said when asked if Duterte approved the proposed budget during the Cabinet meeting in Malacanang on Monday. According to Presidential Spokesperson Ernesto Abella in a press briefing, the proposed budget for 2018 is 12.4 percent higher than the current budget and 21.6 percent of the country's gross domestic product. The top agencies, which will get the biggest share in the proposed budget, are the following: Department of Education, including the State Universities and Colleges and the Commission on Higher Education; Department of Public Works and Highways; Department of Interior and Local Government; Department of Health; Department of Social Welfare and Development; Department of Agriculture; Autonomous Region in Muslim Mindanao; and the Department of Environment and Natural Resources. Abella said the allocation by expense class are: local government units receive 16 percent of the total budget; government-owned and controlled corporations, 4.5 percent; infrastructure and capital outlays, 25.4 percent; personnel services, 29.4 percent; maintenance, 14.5 percent; and debt burden, 9.8 percent. "The priorities of framework. Number one, to enhance the social fabric to make sure that the entire budget is spent to make and being people-centered, fair, just, and value-based; to reduce inequality; to increase growth potential; to maintain foundations for sustainable development," Abella said. The budget to be submitted to Congress was lower than the P3.84 trillion that was initially approved by the interagency Development Budget and Coordination Council. Early this month, the DBCC, composed of the economic managers, decided to lower the proposed budget to P3.767 trillion due to the possible effect of the implementation of the first package of tax reform, which is pending in Congress. In 2018, during the first year of the implementation of the proposed first package of the tax reform, the projected revenue could hit to P2.841 trillion, which is 16.3 percent of GDP. (Celerina Monte/DMS)